IWC marks its fourth year as “Official Festival Time Partner” of the prestigious Tribeca Film Festival in 2016. As in all three previous years of the partnership, the Schaffhausen-based watch brand is releasing a limited-edition watch as a tribute to the Tribeca Film Institute (TFI). This year’s timepiece, officially unveiled this week at the annual “For the Love of Cinema” gala in New York, is a special edition of the IWC Portugieser Annual Calendar.
The IWC Portugieser Annual Calendar Edition “Tribeca Film Festival,” like its blue-dialed, unlimited-series predecessor, displays the month, date, and day, in that order, in three semi-circular windows at 12 o’clock. This “American-style” date indication, which uses three individual disks, is an homage to IWC’s American-born founder, Florentine Ariosto Jones. The watch’s seven-day (168-hour) power reserve, which is stored in twin barrels, is displayed on a subdial at 3 o’clock. The small seconds subdial is positioned at 9 o’clock. As in all annual calendar watches, the date will need correction once a year, at the end of February; fortunately, all corrections can be carried out easily and conveniently, via the single winding crown.

This version of the watch, which is limited to just 50 pieces and sold exclusively in IWC boutiques in the United States, has a striking, slate-colored dial, a hue chosen to represent the streets of New York, host city of the festival and home of its founder, Oscar winning actor Robert De Niro, while the Bordeaux-colored small seconds and power-reserve subdials evoke the red carpets of the film industry’s glamorous awards shows and premieres.

The watch’s sapphire caseback allows an unimpeded view of the automatic movement, which displays some of the modifications that IWC has made to its 5200 family of calibers, including slimmer rotors and more open bridges inset with a solid gold “Probus Scafusia” medallion. IWC’s Pellaton winding system has also been improved, with practically wear-free components made of black and white ceramic. The rotor on this watch has been specialized, bearing the logo of the Tribeca Film Festival, and the caseback includes a milled number “xx/50” to indicate the watch’s extreme rarity. 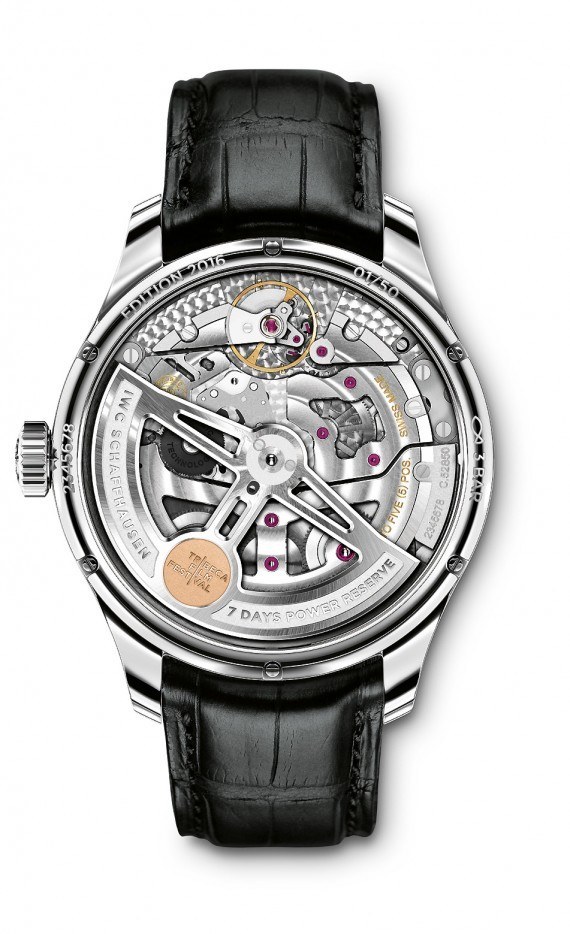 Longtime fans of the IWC brand will appreciate that the watch’s design very closely resembles the original IWC Portugieser model from 1939. Its case is 44.2 mm in diameter, with a grooved bezel. The dial is surrounded by a railroad-track chapter ring, and has the same thin feuille hands and Arabic numerals as did its historical predecessor. It is only the placement of the small seconds subdial (at 9 o’clock rather than 6 o’clock) that significantly varies from the 1939 design — along with, of course, the three calendar windows replacing the 11 o’clock, 12 o’clock and 1 o’clock numerals.

In addition to the watch, IWC will make a $100,000 donation to the TFI, a year-round nonprofit arts organization that supports storytellers with grants, professional development and resources, and helps students in pursuit of careers in film and filmmaking. This donation will be split between TFI and aspiring filmmaker Matt Ruskin, the individual chosen by a jury as this year’s “IWC Filmmaker Award” recipient, who received the honor at this week’s “For the Love of Cinema” gala dinner. “When we partner with film festivals, we want to bring something meaningful and lasting to it,” says Gsell of IWC’s commitment to young filmmakers.