When most wine lovers think Seiko, divers and timers are usually thought of together. Seiko’s antique divers and timers in the Pantheon are safely etched in the history of watches. High-end antique clothes If you want watches, Seiko, too much Seiko and Wang Seiko. But Antique Seiko offers far more than just sports and clothes watches. There are countless models in the wild, every bit of flavor, and some people are more vague than others. More prominent, but little-known model is the champion mountaineer.

1961 The Laurel Mountaineer has a unique large, lume-filled triangle marker at 12, 3, 6 and 9, and they appear in black or white variants. Seiko changed the name of the 1962 champion to the mountaineer, and then again champion the number of athletes cited in the campaign later in the year 850 climbers. The hiking line lasted until about 1965 lines were stopped, although the model name under the championship name continued to be produced. 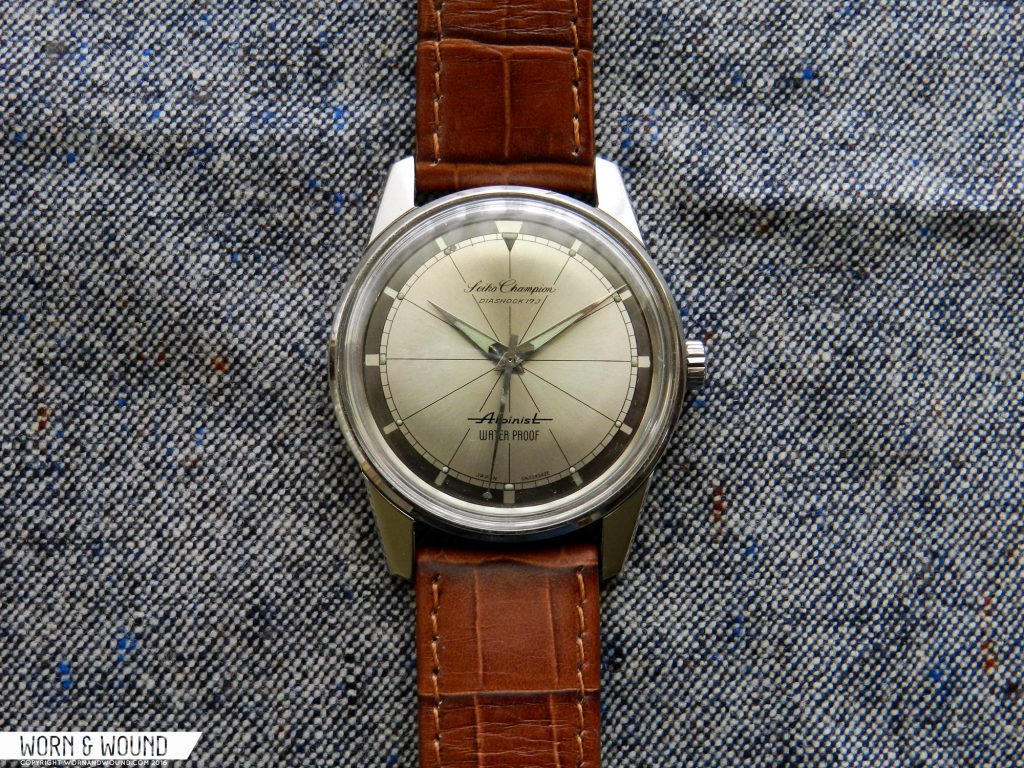 The Alpinist line was later resurrected in 1995 under the Prospex line (sometimes called the “Red Alpinist”), but there was very little in common between the original Alpinist watches and the newer ones, name excluding. The Prospex Alpinist series was actually very popular, though I have to admit I find them to be quite unattractive. I’m not a fan of the hour hand shaped like a warped Mercedes-tipped hand, among other not-so-brilliant styling cues. There were many iterations of the Champion Alpinist and later Prospex Alpinist, but I’ll keep the focus on the watch pictured here, a 1962 Champion Alpinist with case reference J13049.

The case is stainless steel measuring 35mm wide by 43mm long with 18mm lugs. It’s a classic style with clean, slim lugs typical of early 1960s Seiko watches. The snap on case back features a distinctive engraved Alpinist mountain logo, seen only on these models. The glass is a simple domed acrylic crystal.

The crown measures approximately 5mm wide and features reasonably prominent teeth to make it easier to wind the manual movement. It is signed with an “S” over a “W,” which stands for “Seiko Waterproof.” I just love little quirky details like these.

What really makes this watch stand out from the pack is the dial. The Alpinist collection went through several different dial designs, but this model in particular is quite stunning and unique with its two-tone sector design. It is champagne/silver toned with a brown outer ring and a radial brushed finish. There are thin, printed radial lines coming from the center of the dial to each of the small, lumed hour dots. The brown outer ring is broken by a series of small rectangles, champagne silver in color, at each of the hour markers. The only exception is at twelve, where there’s a large triangle. The base end of the triangle is champagne, while the pointed end is brown and extends toward the center section of the dial. 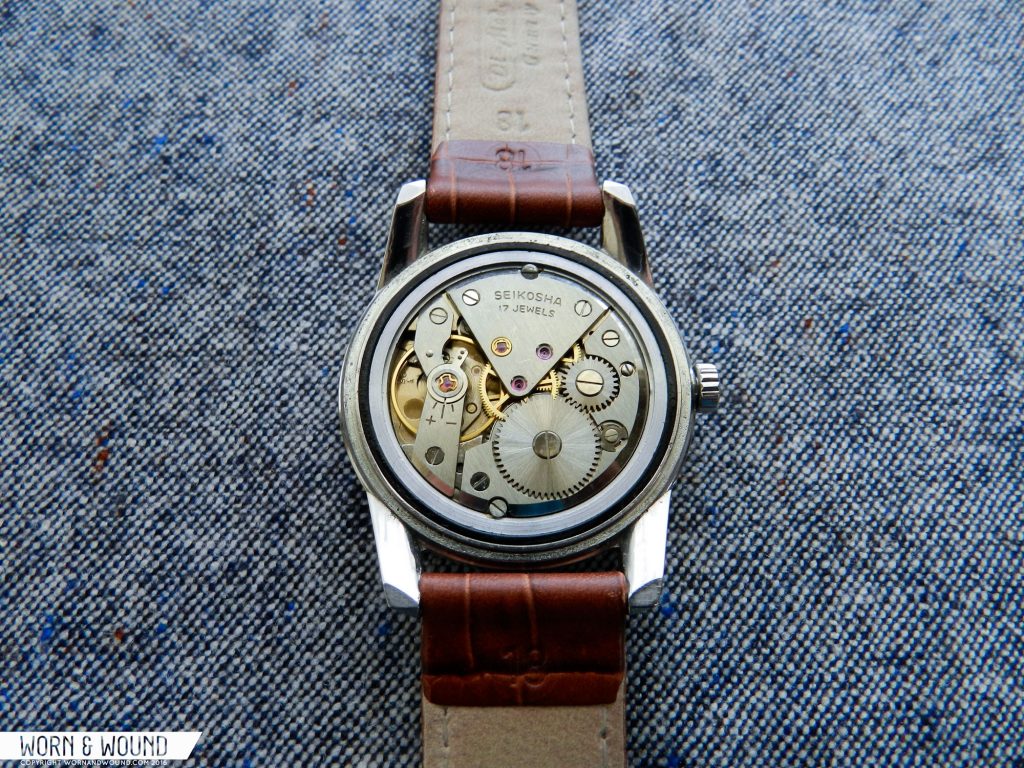 The dial is signed “Seiko Champion” in script below the twelve, and “Diashock 17J” in blocky, italicized letters just below that. Above the six, it is signed “Alpinist” in the distinctive logo font, and “Water Proof” below that in yet another typeface. The hour and minute hands are a dauphine style with large lume-filled centers. The second hand is unique in that it has a lumed half-moon shaped tip that tracks through the brown outer ring for contrast and easy viewing.

The plain and robust manual wind movement is signed “Seikosha” and “17 jewels.” It does not have a model number associated with it, which was common with these early models. While it is largely undecorated, there is a beauty to its simple, utilitarian look. 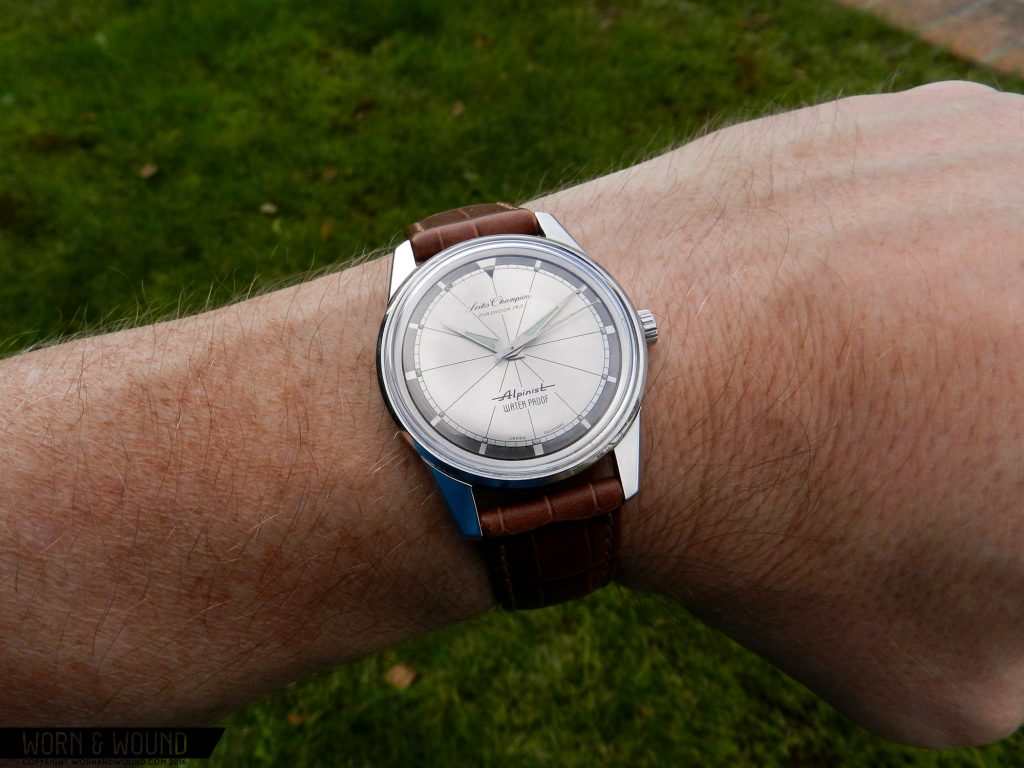 The Champion Alpinist originally came supplied on a leather strap and there was no bracelet option. I have seen some images of the original Laurel Alpinist watches on a bund-style strap with the “Alpinist” script logo printed on the underside of the leather. I’m not sure if this style was offered on the later Champion Alpinist models, but it’s certainly a cool look.

If you’re in the market for a great looking and unique vintage Seiko, the Champion Alpinist is a great choice. They definitely fall in the “affordable vintage” category as the prices they realize aren’t all that high; they typically come in under $750. 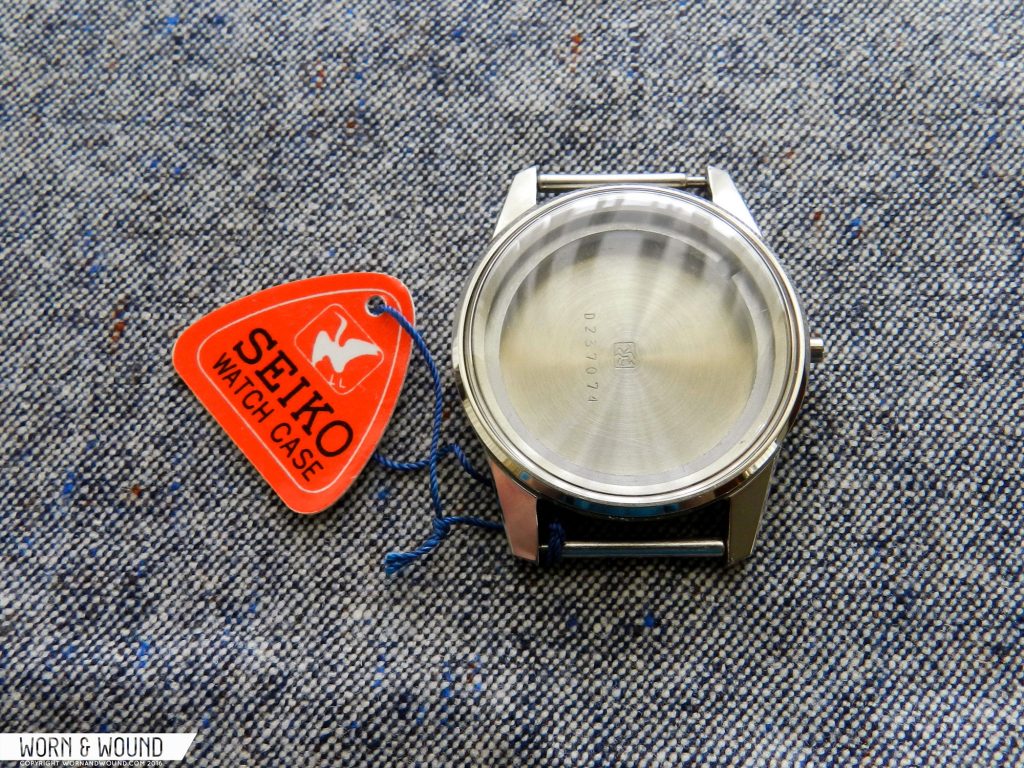 However, the trick is finding one in the first place. Pretty much any of the Alpinist models are fairly difficult to acquire. In fact, I’ve never seen a Laurel Alpinist for sale anywhere and it took me about five years of searching before I nabbed this one.

While the dial and hands are superb, the case is sadly over-polished (of course, any polishing is over-polished in this writer’s humble opinion). But when this one popped up, I couldn’t pass on it despite the overworked case.

As luck would have it, I recently found a new old stock case, with the original hang tag, no less. Talk about rare as hen’s teeth! You can really see the difference in the subtle bevels on the lugs and the not-so-subtle difference in the look of the case back between the polished case and the NOS one. At some point I will probably put the guts from my watch into the NOS case, but for now I’m just enjoying the novelty of having a new Champion Alpinist case on reserve.