Bulova presented several new fashionable watches with a diving bezel at last year’s Baselworld; certainly the most eye-catching (and at the same time also the only one powered by an automatic movement) was the Bulova Sea King Limited Edition (Ref. 96B226), which features a 1,000-meter water-resistant, 50-mm-large titanium case. Most notably, it’s also got an impossible-to-overlook bezel locking mechanism at 9 o’clock — both the top and bottom pushers need to be operated simultaneously in order to unblock the bezel.

It is not the first Bulova watch to offer such a feature: At least two models Bulova released in the 1980s were equipped with bezel-locking mechanisms, albeit much simpler ones: the Sea Hunter, with its second fixating crown; and the Snorkel, with a red pusher not unlike the one found on the Omega Ploprof. 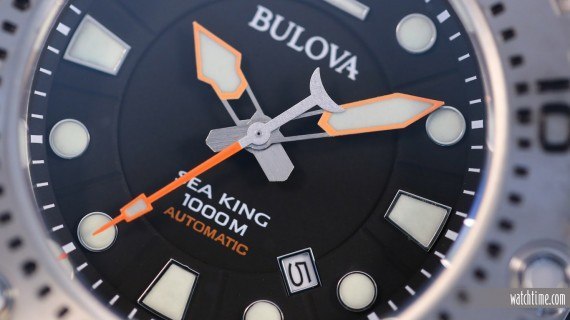