There are celebrities, many of whom are star players, who act as a “brand ambassador” of the watch brands appear in the ad and attend events wearing their watches do not lack. However, some of the stars to redouble their efforts so that the input and often become involved in the design process, especially celebrity watch, they lend their name. Here is developed honors, and was named its famous representatives of 13 celebrity watch list.

Richard Mille has developed several watches in collaboration tennis star Rafael Nadal, including the RM 035 Chronofiable® certified, the RM 027 Tourbillon, and most recently the RM 27-01 Tourbillon Rafael Nadal. Nadal often wears (and occasionally loses) his Richard Mille watches during his games. The RM-027 worn by Nadal was donated to the Only Watch auction in 2011 to fund research into Duchenne muscular dystrophy. A subsequent model, the RM 27-01, debuted as the “the world’s lightest tourbillon” at 19 grams.

After partnering with the L.A. Lakers, Hublot made NBA star and known watch lover Kobe Bryant its newest brand ambassador. The brand subsequently unveiled the King Power Black Mamba, named for Bryant’s NBA nickname. The watch, priced at $25,200, is a limited edition of 250 pieces, of which part of the proceeds will go toward the Kobe and Vanessa Bryant Family Foundation. The watch features gold and purple details as an homage to the L.A. Lakers’ uniform colors. More on the watch, and the partnership can be found here.

Hublot previously partnered with another NBA player, Dwyane Wade of the Miami Heat, to create the Hublot King Power “D-Wade.” Wade collaborated with the brand to design the watch, which features a dial resembling a basketball and a strap with a basketball net-like pattern. The watch also has the color scheme of the Miami Heat uniform. Proceeds from sales of the watch — a limited edition of 500 pieces — went to Wade’s charity, the Wade World Foundation. (Click here for WatchTime’s interview with Wade about the watch. Hublot has also produced a special Miami Heat “team” watch; you can read about it here.)

Ulysse Nardin produced a watch in honor of official “friend of the brand” and baseball legend Randy Johnson, aka “The Big Unit.” The Ulysse Nardin Big Unit Chronograph features several baseball-related details, including the number “51″ on the bezel — Johnson’s number — where the “50″ would normally be, as well as a small baseball icon as the counterweight of the seconds hand. The watch has a retail price of $15,500. Each of the 100 watches in the limited edition comes with a baseball autographed by Johnson. Click here for more on the Ulysse Nardin Big Unit and its origins. 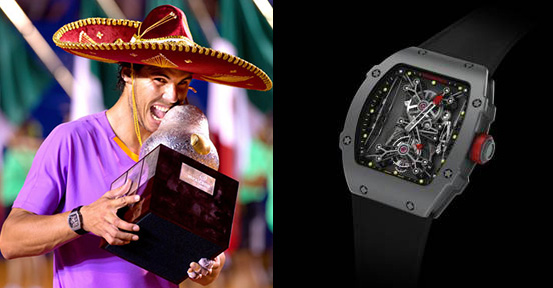