In this year’s Baselworld Oris announced Scouting cooperation with the US Marine Corps Forces, also known as force reconnaissance, one of the elite US Special Forces companies.

According to Wikipedia, “FORECON is responsible for operating independently behind enemy lines performing unconventional special operations, in support of conventional warfare. The unit’s various methods of airborne, heliborne, submarine and waterborne insertions and extractions are similar to those of the Navy SEALs, Army Special Forces, 75th Ranger Regiment, or Air Force Combat Controllers, although Force Recon’s missions and tasks do differ slightly with a focus on primarily supporting Marine expeditionary and amphibious operations. 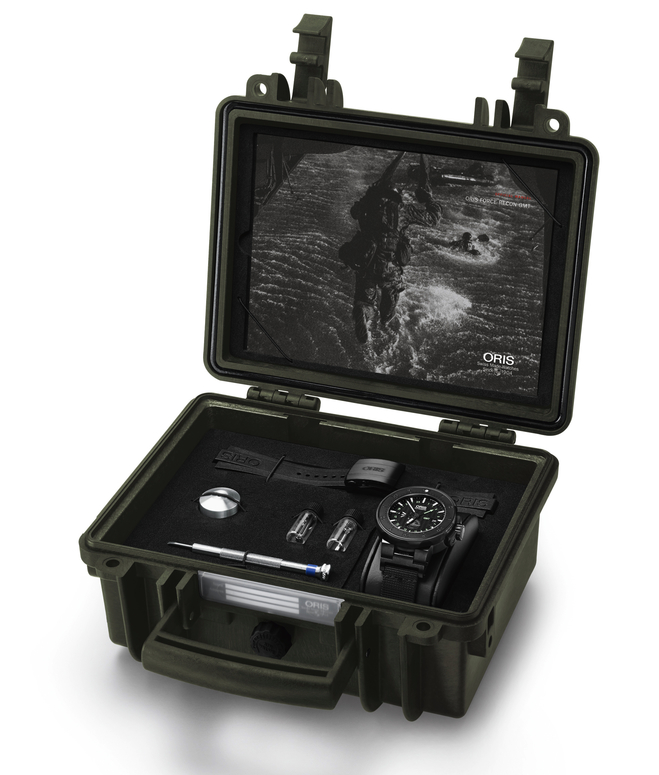 Needless to say, Force Recon soldiers require a highly reliable timepiece that is light and can stand up to the rigorous conditions this elite unit encounters, often behind enemy lines.

The Oris ProDiver is 49 mm in diameter, crafted in a multi-piece titanium case with black plating and a black ceramic bezel with 60-minute dive scale. The larger diameter is good for operating with gloves on and the black gives a non-reflective stealth appearance that is crucial to going unseen by people who likely want you dead. 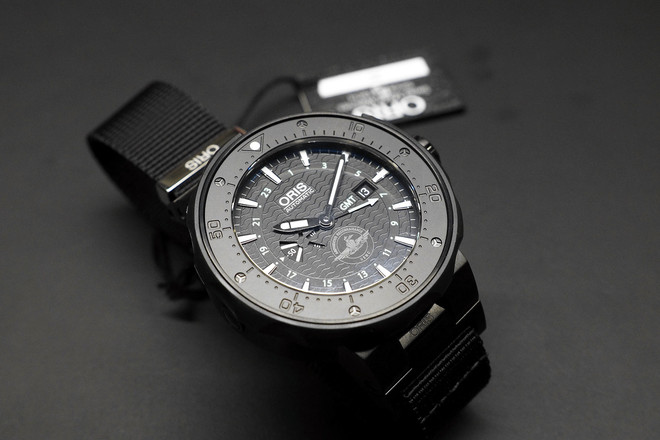 A domed sapphire crystal with an interior anti-reflective coating protects the dial, with a titanium screwed caseback with a special engraving. The screw-in security crown is in blackened stainless steel. Water-resistance is 1000 meters.

Each set comes with a rubber strap and Nato-style nylon strap, both with folding clasps in black titanium. Interhorn width is 26 mm. The watch is presented inside a special Pelican waterproof case with extra links, and a tool to change the straps.

The Oris Force Recon GMT is powered by a Sellita SW 220-1 based movement that beats at 4Hz, has 28 jewels and 38-hour power reserve. The rotor is in Oris red and rotates bi-directionally for more efficient winding. There is a 24-hour corrector, stop second device and instantaneous date function.

The hour, minute and GMT hands, as well as the indices, have a very bright white luminous material which is especially easy to read against the black dial. The dial has a wave motif and a 24-hour inner chapter ring for reading the arrow shaped GMT hand. A unique subsidiary second display is visible as an aperture at 9 o’clock. The date is displayed at 3 o’clock.  The retail price is $4200.