It seemed that these three watches with vintage influences were not really in the spot light by Jaeger-LeCoultre themselves, but during the SIHH more people started sharing images of these watches on their IG accounts and it quickly became a favorite for many.

At the SIHH you will normally find a lot of high priced watches, with the exception of a couple of Baume & Mercier’s and the occasional Montblanc timepiece. Normally I would say anything up to 5000 Euro is difficult to find at SIHH. However, you have to know that SIHH refers to haute horlogerie and we all know that comes with a certain price tag. Jaeger-LeCoultre definitely belongs to the haute horlogerie category, being a true manufacture. This Jaeger-LeCoultre Master Chronograph has a price tag of 8350 Euro (including sales taxes). I have to admit that I have seen brands asking more money for ETA/Valjoux 7750 powered chronographs. However, there’s more to a watch than just the movement of course (something we – watch enthusiasts – tend to forget some times).

Not only is the case of the Jaeger-LeCoultre Master Chronograph only 40mm in diameter, it also measures just 12.1mm in height. It is a watch that basically will fit anyone, with it sleek design. The finish of the case is a nice combination of large brushed surfaces and polished facets. The fact that it uses relatively small rectangular pushers also keeps the proportions of this watch very modest.

I have fairly large wrists, but 40mm remains to be a size that I truly enjoy. I won’t say smaller diameters are ‘trending’ again, as I see about as much > 44mm sized watches on the market today. So I guess it is accepted to go in both directions, but the 40mm diameter remains to be a great size for about everyone. I think it is fair to believe that it is mainly up to you, to buy a watch that make you feel comfortable. Whether that is 36mm or 46mm. 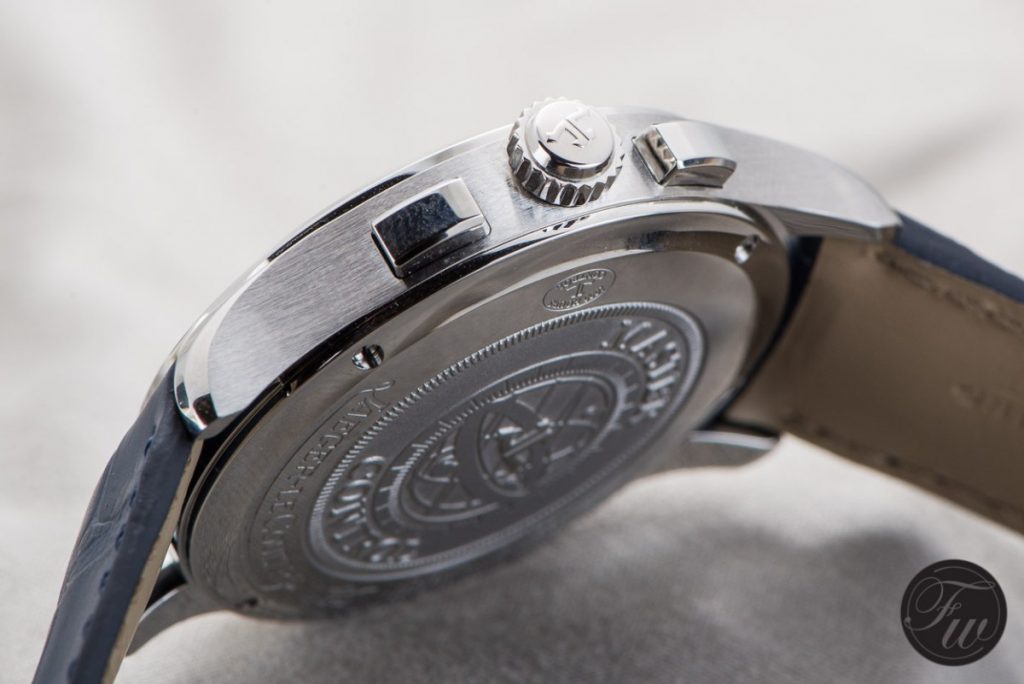 The use of sector dials was applauded by the press during SIHH, but purists seem to have some complaints about them. Not because Jaeger-LeCoultre uses sector dials, but according to them, they used them in the wrong way.

Basically, a sector dial was meant to have a sector for hours, minutes and seconds. Each hand should point towards this sector, so wearers of this watch could focus on what was important to them (seconds for doctors for example). Jaeger-LeCoultre applied the sectors, but also interrupts them by a date window (Master Control Date) and a large time zone indicator (Master Geographic) and with two large sub dials on this Master Chronograph. However, those doesn’t really interfere with the readability and is considered to be the least worst sector dial.

Although I love vintage watches (perhaps not to the same extent as my colleagues Michael Stockton and Balazs Ferenczi), I don’t really see a problem with Jaeger-LeCoultre’s interpretation of the sector dial. You could ask yourself whether collectors of vintage watches would buy a modern (Jaeger-LeCoultre) watch anyway, even if they would have ‘respected’ the official purpose of sector dials. I think I know the answer to that one.

I like the look of the sector dial on this Jaeger-LeCoultre Master Chronograph and it was the main reason why it drew my attention during that ‘exploring round’ on that Monday morning in Geneva.

Another thing I noticed were some comments on our Instagram account about the hands of this watch. I actually like them and the fact that they are ‘open’. This way, you can always read the sub dials without much problems. The length of them are perfect and perfectly indicate the hours, minutes and seconds without having to take the slightest guess if you want to measure very precisely. 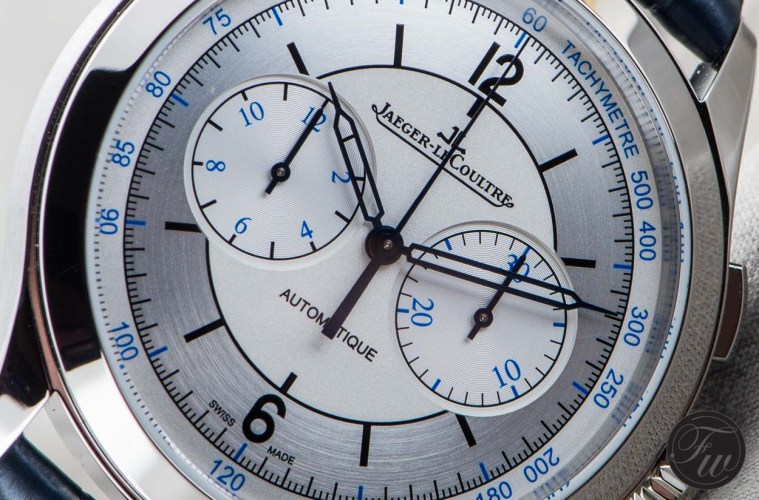 As you can see on the close-up above, the silver and brushed silver elements give a wonderful contrast and the use of blue adds a bit of color. The snailed sub dials look amazing as well.

Jaeger-LeCoultre doesn’t hide that they have tons of in-house manufactured movements. They might have more calibers in their current collection than any other Swiss brand out there. The caliber 751G movement is one of their chronograph movements, and – as written above – also used in their Deep Sea Chronograph timepiece. So it is not a new caliber, just one that has not been used often by them (perhaps due to the two-register lay-out). 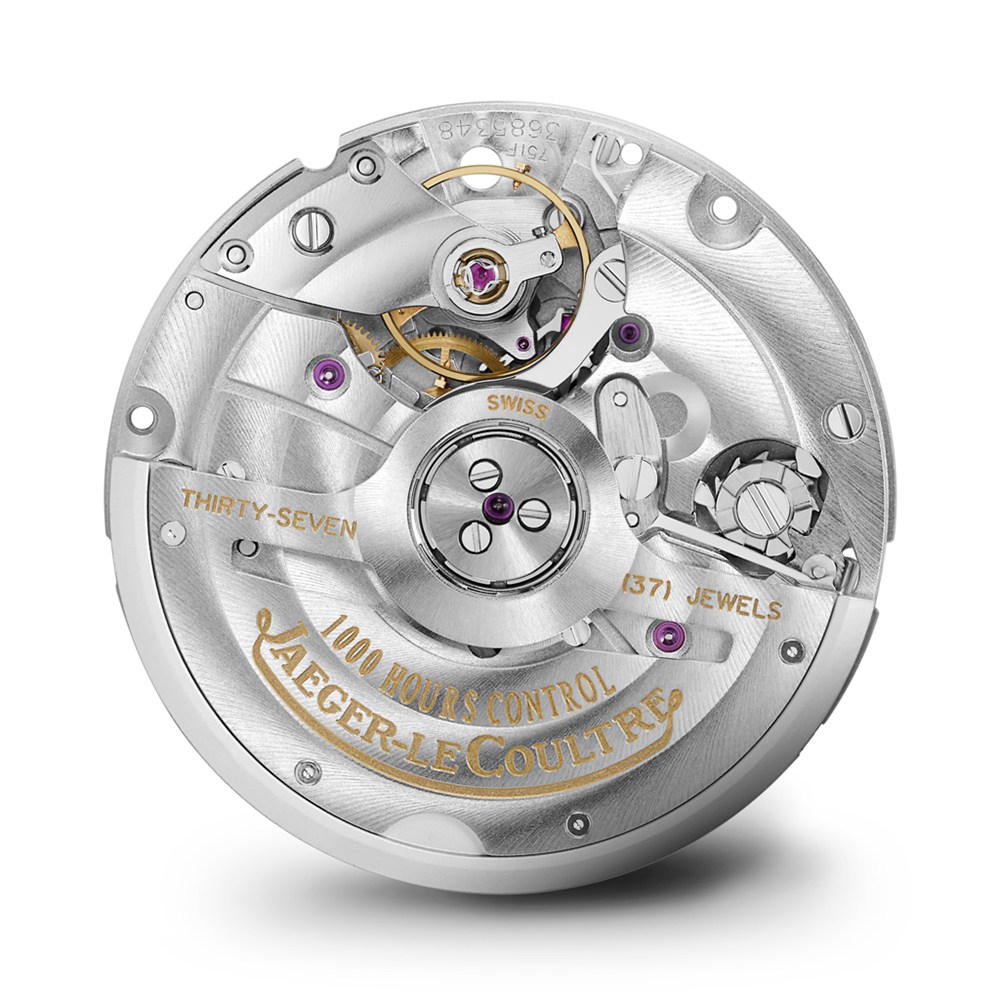 Caliber 751G consists of 235 parts, operates at 28.800vph and has a power reserve of 65 hours (using two barrels). Luckily, no date (that would have ruined the watch for me). This column-wheel chronograph has underwent the 1000 hours of control by Jaeger-LeCoultre, to ensure proper functioning.

By using a stainless steel caseback, Jaeger-LeCoultre doesn’t allow you to have a glance at the movement. However, it has the same nice finish and appearance as the ones you do know from having a sapphire caseback.

Instead, the closed caseback indicates the usual information and has this large JL medallion in stainless steel. It has been attached to the midcase using 4 small screws. 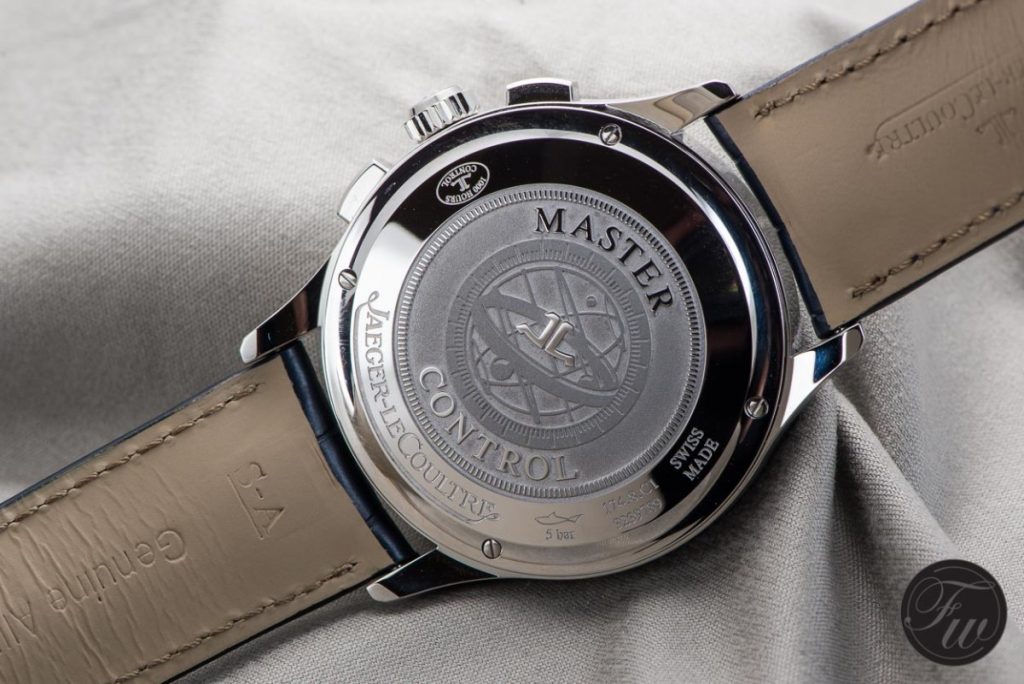 For many brands, life has become harder in the past few years. Before writing another article of SIHH, many brands are clearly looking for the brand logo they need. Some people are ordinary. Not plot home. They can use their many traditional inspiration and build on the existing success of the collection. I do not like everything they think of (I do not need, as long as others do), but they are the kind of Jaeger-LeCoultre.