The LV104 calibre was developed entirely from scratch by La Fabrique du Temps Louis Vuitton. In fact, fulfilling the criteria of the “Poinçon de Genève” means designing the movement according to it from the first component. From this blank page came the most aerial of movements ever designed by Louis Vuitton. The skeleton calibre appears to be suspended in mid-air by invisible forces, as if floating inside its 950 platinum case. The skeleton structure is ingrained in the Louis Vuitton watchmaking culture but it had never been taken so far in terms of slimness. This goal has been achieved by adopting a minimalist approach to construction, with only 168 components. Its lightness begins with simplicity and continues in a delicate skeleton. 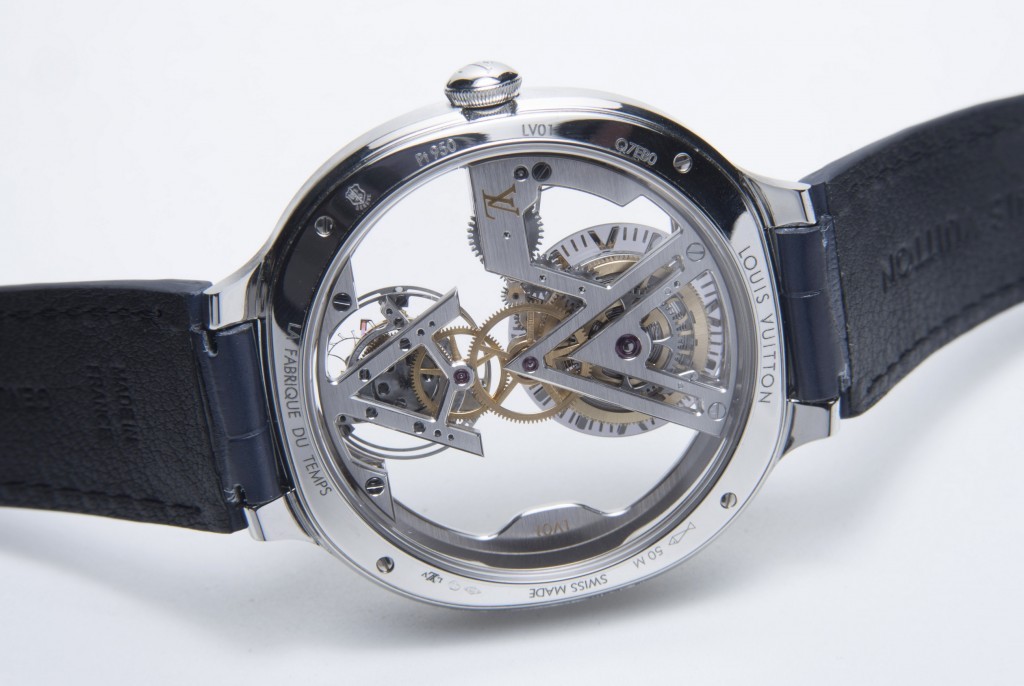 The graphic strength of the Flying Tourbillon “Poinçon de Genève” watch is based on its minimalism.Nothingness and transparency dominate this watch, which shows the technical prowess that has been implemented in its design. At 6 o’clock, a completely new tourbillon performs a rotation on itself every minute, and at the low frequency of 21,600 vibrations per hour. In perfect harmony with the lightness of the watch, it is of the flying kind. That means that it is not held by an upper bridge, it is only supported from below.

As such, it nearly touches the sapphire crystal and appears to project a letter of the alphabet towards the onlooker: the V from the tourbillon carriage. Every minute it overlaps the lower tourbillon bridge, also a V shape, shaping the letter into thin air. The Louis Vuitton identity is thus asserted through the structural and decorative elements of this watch. At noon, an off-centred dial shows the hours and minutes. It is punctuated by a series of index, which are also in a V shape. Always with lightness in mind, the dial is made of smoked sapphire, achieved by metallisation. The barrel can be made out which gives this hand-wound movement 80 hours of autonomy. The fine structure and vertically aligned movement wheels are a feast for the eyes with their apparent weightlessness inside the brand new case.

As the newest addition to the Louis Vuitton luxury watch  collections, the case is the combination of a circle and a square.Measuring 41 mm in width and 43.7 mm diagonally, it fits into no existing shape category; it is neither cushion nor oval. Its polished mirror case with distinctive and sophisticated bevels underscores its natural finesse. At just 9.1 mm thick, the Flying Tourbillon “Poinçon de Genève” watch fits naturally onto body curves. The soft lines of this 950 platinum case are an extension of the wrist. These exceptional ergonomics are enhanced by its short and plunging lugs.

It is impactful because it plays with nothingness, sophisticated yet the ultimate in simplicity, the Flying Tourbillon “Poinçon de Genève” shakes up the codes of fine watchmaking.