The Longines Avigation Oversize Crown, launched in 2013, is modeled on a Longines pilots’ watch from the 1920s. Its most salient feature is, as its name suggests, its crown, which is prominent not just because it’s huge but because it protrudes very far from the case. In the chronograph version of the watch, the one we tested, a chronograph button is integrated into the crown. The watch is a monopoussoir: the same button is used to start, stop and reset the chronograph. The movement is ETA’s automatic Caliber A08.L11, which Longines renamed the L788.2. That name appears in gold-filled lettering on the winding rotor. The L788.2 is a variation of ETA’s A08.L01, which debuted in 2010 and is derived from the ETA 7753. ETA sells the A08.L11 only to Longines; both companies are owned by the Swatch Group. Unlike the ETA 7753, which has coulisse switching, the L788.2 has a blued column wheel. It also has a longer power reserve, 54 vs. 46 hours. Other modifications made to the ETA movement include altering the shape of the regulator mechanism and of the shock absorbers.

Thanks at least in part to the column wheel, the chronograph is easy to operate: little pressure is needed to trigger the start, stop and reset functions. The column wheel is invisible, though, because the watch has a steel caseback, which is pressure-fit rather than screwed in place. It is rather unexcitingly   engraved with the model’s long name, “The Longines Avigation Oversize Crown Single Push-Piece Chronograph,” and with its serial production number. Historically, pilots’ watches from Longines and other brands had opaque metal backs with nothing on them but engraved lettering; this watch is upholding that tradition. Purists will laud that fact but movement voyeurs will lament it.

The decorative patterns on the bearing parts and rotor are competently applied, and the polishing on the chronograph’s lever is also satisfactory. The A08.L11 does not have beveled and polished edges. Longines has retained from the ETA base the rocking pinion that serves as the chronograph’s coupling mechanism. This rocker device is inarguably reliable and robust, and is suitable for Longines, which is known for affordable yet high quality watches. But it isn’t likely to inspire oohs and aahs from aficionados of mechanical timekeeping. 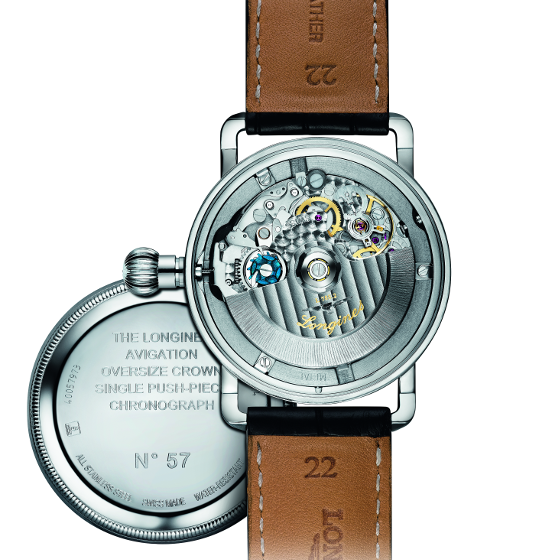 The watch had acceptable rate results, gaining six seconds per day on the timing machine and seven to eight seconds on the wrist. The results were even better when the chronograph was switched on, and the amplitude declined by an average of only 11 degrees.

This watch is handsome, distinctive in design, easy to operate, comfortable to wear, and equipped with an interesting movement. And at $3,500, it is attractively priced.

We have a few caveats for a potential buyer, though. First, he should know that the lone button in the crown won’t allow him to restart the chronograph from its stopped position: pushing the button triggers the chronograph’s three functions (start, stop and return to zero) in unchangeable succession. Second, the bezel’s bearing is not firm – in fact, the slightest touch will move it, so the wearer should definitely not rely on it for timing intervals, and instead use the chronograph.