Last year, American Pharoah made history by becoming the first horse since Affirmed in 1978 to win Thoroughbred Racing’s Triple Crown, with thrilling victories in the Kentucky Derby, Preakness Stakes, and Belmont Stakes races. It was perhaps inevitable that Longines — the Longines   Swiss watch brand that is the official timekeeper of the Triple Crown, as well as a partner of numerous equestrian sporting events — would commemorate this milestone with a special timepiece: the Longines Conquest Classic Triple Crown Limited Edition.

As I did last year, I had the opportunity to attend this year’s Kentucky Derby as a guest of Longines, and had the added treat of wearing the limited-edition watch for the weekend’s array of festivities and events. These included the running of the Kentucky Oaks, held on the eve of Derby Day and sponsored by Longines, which pits a field of three-year-old fillies against each other in a $1 million stakes race; the Longines-sponsored Kentucky Oaks fashion contest; the Hermitage Derby Toast, a cocktail party hosted by Longines and Vanity Fair at Kentucky’s avant-garde 21C Museum; and of course, the Kentucky Derby race itself, which Longines’s guests enjoyed from the luxurious atmosphere of the Mansion at Churchill Downs, surrounded by an array of VIPs from the world of sports and entertainment. I even had the opportunity to flash the limited-edition watch for the cameras while walking the red carpet on Derby Day (as well as the pink carpet on the pink-themed Kentucky Oaks Day). Scroll down for a recap video of the weekend, images from the various events, and notes and photos from my hands-on experience with the Longines Conquest Classic Triple Crown Limited Edition. 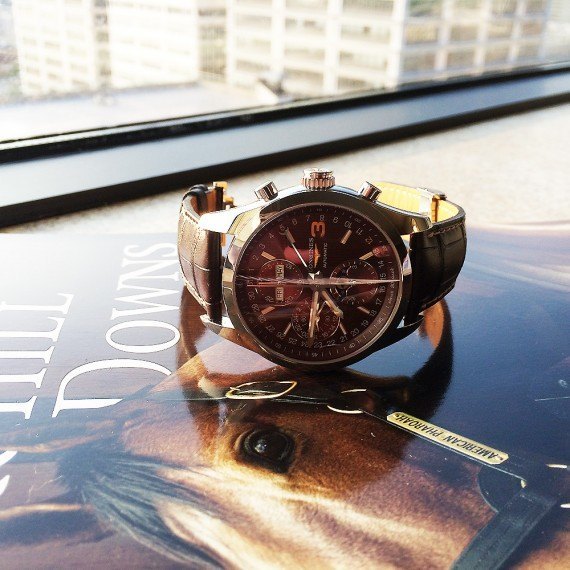 The watch, appropriately enough, is a new version of Longines’s Conquest Classic Moonphase, the timepiece awarded to American Pharoah’s winning owner, trainer, and jockey at last year’s Derby. (I review that watch extensively, and report on my 2015 Kentucky Derby experience with Longines, here.) This one, however, is limited to just 180 pieces, and available only in the United States. There are 20 pieces in rose gold, 40 in two-tone rose gold and steel, and 120 (including my loaner watch) in steel.

The Conquest Classic Triple Crown Limited Edition boasts possibly the most “equestrian” aesthetic of any Longines men’s watch in Longines’s collection: the dial is a rich brown color that Longines says was chosen to match the shades of American Pharoah’s coat. It also makes a fine monochromatic match to the brown alligator leather strap. The other special touches are suitably, and cleverly, subtle: The moon-phase disk at 6 o’clock features a nontraditional moon graphic with the tiny image of a jockey on his mount. The numeral “3” at 3 o’clock — the only hour marked by an Arabic numeral — is a shout-out to the Triple Crown. And the numeral “12” on the date track is emphasized in a different color, a reference to American Pharoah being the 12th horse to claim thoroughbred racing’s most prestigious prize.

As with its predecessor, this watch calls itself a “moon-phase,” but it actually offers much more than that in the way of complications. There is a chronograph, with a central sweep seconds hand and subdials at 12 o’clock (30-minute counter) and 6 o’clock (12-hour counter); a small seconds subdial at 9 o’clock, paired with a 24-hour indicator; the day and month in two parallel windows inside the 12 o’clock subdial; and a pointer date function equipped with a moon-shaped central hand. (At times, the dial can look almost too busy — upon first placing it on my wrist, I had to stare at it for several seconds before I could confirm the presence of the running seconds — but never lacks for overall sporty elegance.) All of these functions are powered by the automatic Caliber L678, a modified ETA Valjoux 7751, which offers a 48-hour power reserve.

Like the dial, the sapphire caseback of this Limited Edition timepiece is enhanced with visual flourishes that mark it as rare and special, namely the etched image of the official Triple Crown logo, along with the limited-edition number. The strap, which is perhaps thinner and more understated than one would expect to accompany a 42-mm case, fastens securely with a steel triple-folding clasp with push-button opening mechanism (which you may appreciate when you’re punching the air while cheering your horse to victory).