Oris might not be the first watch manufacturer to introduce a dive watch in a bronze case, but the company certainly managed to link its first attempt at one to an important milestone in the history of diving: as its name indicates, the Oris Carl Brashear Limited Edition (Ref. 733 7720 3185) is dedicated to the first African-American to become a U.S. Navy Diver in 1954, and U.S. Navy Master Diver in 1970, despite also having had to overcome an amputated left leg. (Cuba Gooding, Jr. played the role of Brashear in “Men of Honor”, a movie inspired by the Brashear’s life story). His motto — “It’s not a sin to get knocked down; it’s a sin to stay down” — can be found on the watch’s stainless steel caseback, whilst the bronze used for the case, crown and bezel pays tribute to the dive helmets used during his era. As with every bronze watch case, this one will develop a vintage looking patina over time. 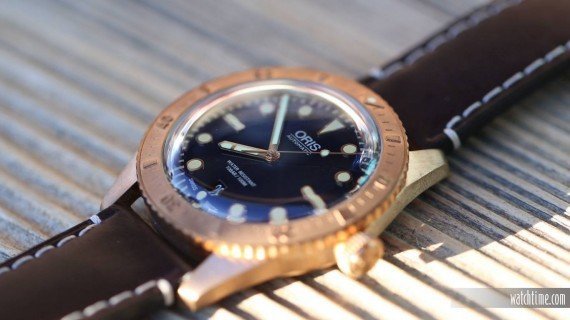 The Oris Carl Brashear Limited Edition is based on the Diver Sixty-Five, introduced in 2015 (see review here), but features a larger case diameter (42 mm instead of 40). It is powered by the Oris Caliber 733 (based on the Sellita SW200), is limited to 2,000 pieces, and offers a water-resistance of 100 meters. It also, of course, has the same domed sapphire crystal as the original Diver

The watch is being sold with a special wooden box and Oris says it should be available at retail from April 2016. Expect a list price somewhere around $2,600 (based on the Swiss list price of CHF 2,600).