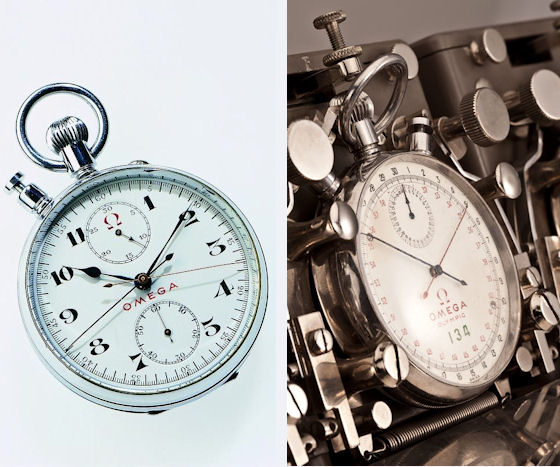 Omega manufactured its first chronograph in 1898, and within 10 years, the timepieces had been used to measure time at more than 16 sporting competitions. After winning 1st place in all six categories at the 1931 Geneva Observatory trials, Omega’s reputation for accuracy led the International Olympic Committee to appoint Omega as the official timekeeper of the 1932 Los Angeles Olympics. This was the first time in Olympic history that one brand had been given the responsibility to time all events. The brand supplied 30 high-precision chronographs capable of measuring 1/10th of a second (an Olympics first), all of which had been certified as chronometers by the Observatory at Neuchatel as well as the National Physics Laboratory in the United States. (The timekeepers at the 1928 Olympic Games in Amsterdam used their personal stopwatches.)

Even Omega’s advanced stopwatches did not eliminate Olympic controversy. In five different races, the winner and runner-up were recorded as having the same time. The most famous controversy involved the 100-meter dash and the duel between Ralph Metcalfe and Thomas Edward “Eddie“ Tolan. To the spectators, it appeared that Metcalfe won the race, and the timekeepers’ hand-held stopwatches recorded three times of 10.3 seconds for Metcalfe and two times of 10.3 and one of 10.4 seconds for Tolan. Yet Tolan was declared the winner, in an early Olympic “photo finish.”

A “Chronocinema“ camera filmed the end of each race, and it was used to record times to the nearest 1/100th of a second. The rules at that time stated that the winner was the first runner whose torso completely crossed the finish line, not the one whose torso reached the line first. After reviewing the film, the judges ruled that Tolan had won, fully crossing the line 5/100ths of a second ahead of Metcalfe.

This controversy presaged the need for ever more accurate timers, and methods of determining winners. Omega says that today, timing an Olympics requires several hundred professional timekeepers and data handlers, supported by up to a thousand specially trained local volunteers, all using some 400 tons of equipment, including scoreboards, miles of cables and optical fiber, and state-of-the-art timekeeping and data-handling technology, developed by Omega and adapted to the requirements of each sport.