In March 2015, Oris launched a re-edition of one of the first diving watch, Oris diving sixty-five, the year after it named were introduced. 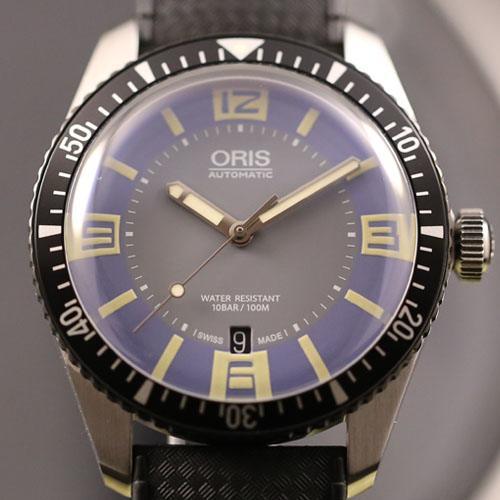 Nine months later, the highly popular model got a new version with an even more retro-looking dial, which could be a great choice for those who may not want another black-dialed dive watch.

We at DiveIntoWatches.com recently had the chance to see the Oris Sixty-Five Diver with blue-and-gray “Deauville” dial (named after a French town) in person.

Compared to the black-dialed Diver Sixty-Five, the new dial highlights the date disk much more.

Like its black-dialed counterpart, the new version  is powered by an automatic Sellita SW200 movement and comes with 40-mm-diameter case that offers a water resistance of 100 meters.

Among the highlights of the Diver Sixty-Five are undoubtedly its domed sapphire crystal and slightly curved dial.

The hands, and the dial ‘s hour markers, are covered with Super-LumiNova.

The Oris Diver Sixty-Five, in both of its dial versions, is priced at $1,850 and is available with different strap options (shown here is the tropic-style rubber strap).