It may be a mouthful to say, but it is also an earful and an eyeful. Panerai brand watch  has just unveiled its most complicated watch to date: the Radiomir 1940 Minute Repeater Carillon Tourbillon GMT. The new watch – which is made to order only — is remarkable for a number of reasons, not the least of which is the double repeater mechanism that enables the watch to chime either a local or a second time zone. 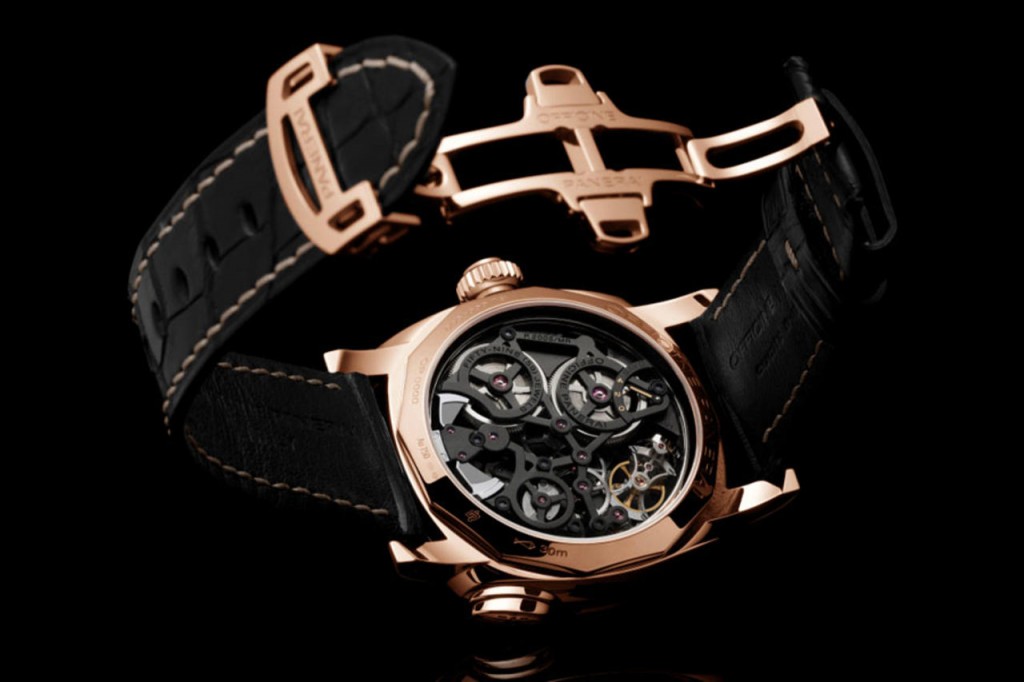 Because the timepiece is made to order, customers can personalize certain aspects of the watch, from case materials, to hands and strap choices. However, the movement — the new hand-wound skeletonized P.2005/MR manufacture-made caliber — remains intact.

Incredibly complex and time-consuming to build, the movement has a wealth of features and functions to offer. To begin with, the minute repeater function clearly places the brand in a class by itself. Here’s why:

Essentially, instead of a typical minute repeater wherein the watch strikes the hours, quarter hours and minutes, the Panerai double repeater plays the hours, the 10-minute increments and the minutes. Also, because there are two complete minute repeater mechanisms (gongs, three hammers and other parts) in the watch, it can chime local or home time (while traveling) at will by means of a push piece at 8:00. Additionally, the wearer can switch between the two zones almost instantaneously via pressing pusher on the crown when it is in selector mode.

The carillon function of the watch enables multi-tones, so that the hours are chimed on a single deep tone, but the 10-minute (decimal) intervals are sounded with triple chimes. The minutes have single higher-pitched tone. This melodious sound can only be accomplished thanks to the use of three hammers instead of two. To further enhance the sound, Panerai turns to 18-karat 5N rose gold for the 49mm case, which is believed to offer the highest quality of sound.

The tourbillon escapement in this watch is also a magnificent achievement of technology and craftsmanship. In fact, the tourbillon regulator is patented by Officine Panerai and has a unique system wherein the rotation of the tourbillon cage is on an axis that is perpendicular (instead of parallel as in most classic tourbillons) to the balance axis. The rotation of the tourbillon cage is 30 seconds instead of 60, and that speed is indicated in the small seconds counter at 9:00. The faster speed and the arrangement of axes enable it to compensate more quickly for changes in rate – ensuring more accurate precision.

The P.2005/MR caliber was four years in the making – developed by the Laboratorio di Idee in the brand’s Neuchatel manufacture. It offers 96 hours of power reserve and the watch is water resistant to 30 meters – but who in their right mind would take this beauty anywhere near the water?

The Radiomir 1940 Minute Repeater Carillon Tourbillon GMT comes on the heels of the SIHH 2016 unveiling of the Lo Scienziato Luminor Tourbillon 1950 GMT Titano – a skeletonized tourbillon that left many speechless with its technical prowess and beauty.

So, you ask, what is the price? Speculation has it at about $400,000 in its current form. Of course, that number can fluctuate based on the individual buyer’s customization.  The watch will be part of a retrospective and current-day Panerai exhibition “Dive into Time” that is slated to take place at the Museo Marino Marini from May 18-21 in Florence, Italy.