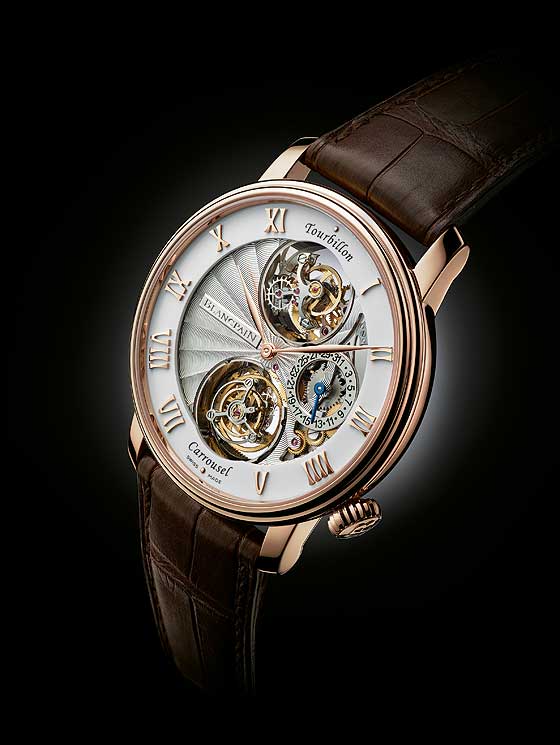 One of Blancpain’s highlights at this year’s Baselworld is the L-evolution Tourbillon Carrousel, a highly complicated piece with a futuristic dial and case design to match. Tourbillons and carrousels both rotate their cages within a movement, but understanding them can also get your head spinning. So let’s take a moment to break down the differences between them.

When Blancpain introduced its first Tourbillon Carrousel in 2013, the technical innovation made some enthusiasts do a double take: aren’t a tourbillon and a carrousel basically the same thing? Both mechanisms have the same goal – to make the timekeeping more consistent by counteracting the effects of gravity. However, they come at it in slightly different ways. While a tourbillon keeps the escapement in constant motion by rotating around the fixed seconds wheel, the carrousel is powered by a separate gear. Thus, a carrousel uses one gear train to power its rotation and another to deliver power to the escapement. For the Tourbillon Carrousel watch to operate both elements it has a designated barrel for each, and uses two differentials to average their rates and to chart the remaining power reserve.

Click on the image below for an exclusive YouTube video, taken inside Blancpain’s manufacture, that demonstrates the differences between tourbillons and carrousels:

The combination of the two elements is definitely high-tech, but the 2013 Tourbillon Carrousel, a rose-gold model and part of the Le Brassus collection, was designed to play up heritage more than innovation. By contrast, the L-evolution version feels much more cutting-edge. The L-evolution collection involves avant-garde case designs and materials, while also capitalizing on lengthy power reserves to ensure the watch maintains its rate.

The L-evolution Tourbillon Carrousel is larger than its forebear, with a 47.4-mm case diameter. The case, in platinum, has an innovative design, with many hard angles and its top and bottom extending out towards the integrated lugs. The tourbillon is placed at 11 o’clock; the carrousel, at 5 o’clock, bears a miniature Blancpain lyre logo at its center. The movement is highly skeletonized, as are the hands. The bridges and base plate have received an NAC coating to give them a dark gray color. There are sapphire crystals on both front and back, and when you flip the watch over you can also see the cosmetic geared ring outlining the movement.

Blancpain Watches: A Test and History of the Blancpain Fifty Fathoms