In 2014, Jaeger-LeCoultre released the limited-edition Geophysic 1958, a tribute to a famous and collectible chronometer that the brand produced in the “International Geophysical Year” of scientific exploration (Click here for more detail on that watch). Now the Jaeger-LeCoultre Geophysic becomes an actual contemporary collection within the brand, with the release of two new, non-limited models: the Jaeger-LeCoultre Geophysic True Second and Geophysic Universal Time. The new Geophysic watches — launched simultaneously this week at the Watches and Wonders fair in Hong Kong and at a media event at New York City’s Clock Tower restaurant — sport distinctive case designs that fans of the 1958 original (Jaeger-LeCoultre North America president Phillipe Bonay among them) should appreciate, as well as new movements that will appeal to avid enthusiasts of high-horology tech. 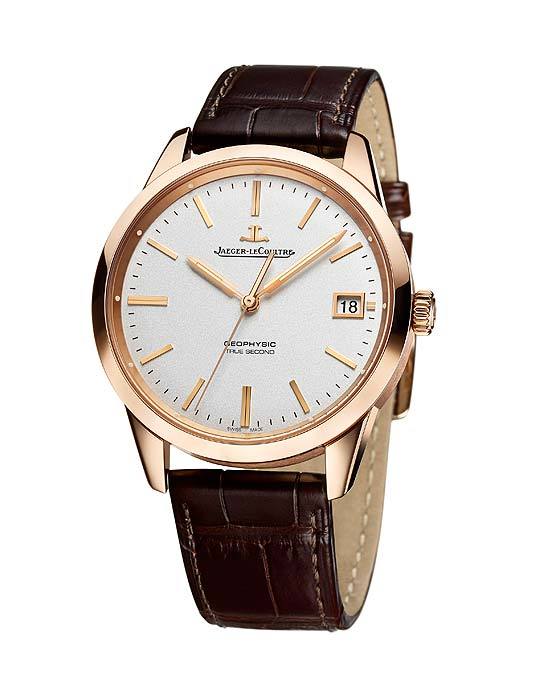 The Jaeger-LeCoultre Geophysic True Second, with its 39.6-mm-diameter case and its grained, silver-toned dial, would appear at first glance to be the simpler of the two new timepieces, but a closer look reveals much more complexity. The case features lugs that meet the case middle not with a smooth curve but with a sharply defined angle, an expression of this model’s tool-watch heritage. The sides are polished to accentuate their silhouette; a close glance also reveals that the bezel slightly overlaps the case and lugs, making for a very streamlined look. The screwed-in caseback — a feature found most often on divers’ watches — also echoes that of the watch’s historical predecessor, and ensures a respectable water resistance of 50 meters. The inner part of the case middle, surrounding the dial, features Super-LumiNova-filled “dots,” corresponding with the dial’s applied, linear hour markers, that enable the wearer to read the time easily in the dark. This was another aesthetic touch used in both the 1958 original and the modern limited-edition that has been revived for the new models.

The new movement, Caliber 770, was developed and manufactured in-house at Jaeger-LeCoultre’s manufacture in Switzerland’s Vallée de Joux, and represents a technological milestone for the brand. It features an atypical, non-circular balance wheel called a Gyrolab, a device originally developed in a laboratory version for the movement of Jaeger-LeCoultre’s Master Compressor Extreme Lab 1, released in 2007. Eight years later, the Gyrolab— whose main attribute is the reduction of air friction to ensure greater timekeeping precision — has evolved from prototype to key feature in an entirely new line of watches.

The other outstanding feature — and the one for which the True Second derives its name — is the “true seconds” (known more commonly as “dead-beat seconds”) feature, which causes the seconds hand to jump forward once every second, a rarity in a mechanical watch and one that enables a much more precise reading of the seconds. This function is, again, a nod to the original Geophysic’s role as an authentic, time-measuring instrument for scientific research. 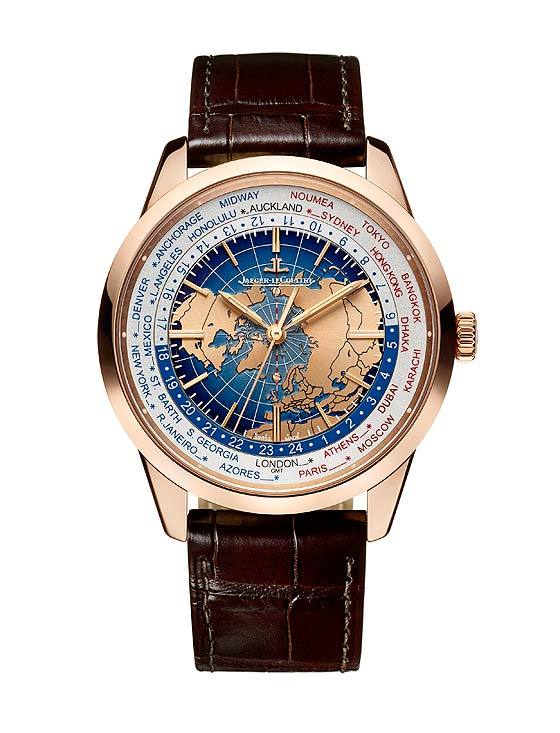 Another first for the Jaeger-LeCoultre Geophysic line: the new movements are self-winding, with a rotor crafted from a single block of solid gold in the shape of the “anchor” motif that echoes both the shape of the movement’s escapement lever and the Jaeger-LeCoultre logo. The rotor is openworked to allow a more unobstructed view of the movement, whose ample bridges are decorated with côtes de Genève. And of course, each caliber undergoes JLC’s rigorous and exclusive “1,000 Hours Control” testing (details on which here) for reliability and precision.

The more complicated of the two new watches, the Jaeger-LeCoultre Geophysic Universal Time, is equipped with the new Caliber 772, which adds a world-time function to the base Caliber 770. Its eye-catching world-map dial features a sea in subtly graded shades of lacquered blue, with engraved continents sporting a sunburst finish. A mobile city disk, with the printed names of 24 world cities, surrounds the dial, enabling the wearer to simultaneously read the time in the 24 major world time zones. Operating the world-time function is simple, by means of the crown rather than a separate push-button. Once the “universal time,” or second time zone, is set, it won’t need adjusting during travel. The wearer only needs to adjust his or her local time by moving the hour hand backward or forward — independently of the minutes and seconds to prevent loss of precision. The Geophysic Universal Time has slightly larger case diameter (41.6 mm) than the True Second. Both are slightly

The Jaeger-LeCoultre Geophysic True Second and Geophysic Universal Time are both available in either a stainless steel or rose gold case. The True Second is priced at $9,050 in steel (Ref. Q801 84 20); and $17,500 in rose-gold (Ref. Q801 25 20). The Universal Time is $15,000 in steel (Ref. Q810 84 20) and $25,000 in rose gold (Ref. Q810 25 20). Both are on alligator straps, with pin buckles in the steel versions and gold folding clasps in the gold models. Jaeger-LeCoultre has also announced that aficionados interested in these new models will not need to wait long for them: both are available at retail now.