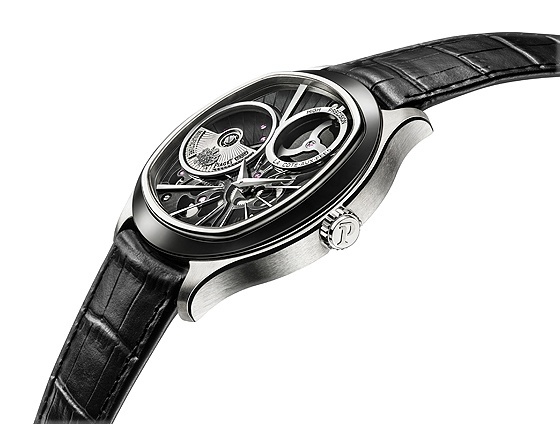 It has become known among educated watch enthusiasts that Piaget makes its mechanical movements in-house. What is less known is that Piaget is one of the very few Swiss watch brands that also makes its own quartz movements in-house as well. The brand paid tribute to this dual technical heritage at SIHH 2016 with the Piaget Emperador Coussin XL 700P, a “concept” watch (it will be produced and sold) that combines a mechanical caliber with a quartz-driven regulator.

Limited to 118 pieces, the Piaget Emperador Coussin XL 700P, and its ultra-thin, generator-regulated mechanical movement, Caliber 700P, commemorates the 40th anniversary of Piaget’s very first in-house quartz movement, Caliber 7P, which debuted in 1976. Firmly ensconced in Piaget’s Black Tie collection of elegant men’s dress watches, it features the familiar Emperador cushion-shaped case, measuring a stately 46.5 mm in diameter and made of white gold with a black ALDC-coated gold bezel. The “inverted” construction of the movement places the main functional elements on the dial side, with the offset micro-rotor and the quartz generator forming a figure eight, while the off-center, pointed hour and minute hands sweep over finely tapered hour indices.

Caliber 700P, for which Piaget has filed more than 10 patents, is the result of two years of research and development at the brand’s manufacture in La Cote aux Fees, Switzerland. It uses a high-frequency quartz element (32,768 vph, or roughly 5.33 turns per second) to control the rotation of the generator and wheel train of the mechanical, self-winding movement. The system ensures a high degree of precision as well as resistance to magnetic fields and gravity. Treated with a distinctive black coating, the movement boasts a number of haute horlogerie finishes: among these are the guilloché motif on the micro-rotor along with the Piaget coat of arms; sunburst and chamfered bridges; circular stain-brushed wheels; and silver-toned screws. The Piaget crest also appears as an engraving on the caseback, which allows just a glimpse into the inner heart of the watch with two small viewing windows.