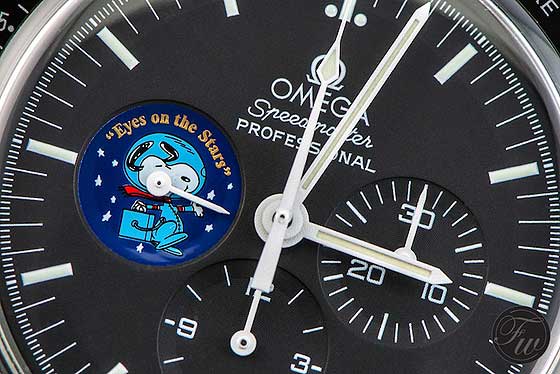 As you know, Omega has produced quite a few limited editions based on the original Speedmaster Professional. Some like these limited editions, others don’t. However, the fact is that some of these limited editions do appreciate in market value quite well after a few years. One of these models is the Omega Speedmaster Professional “Snoopy Award.” My professional career started around the time this model was introduced (2003), so it was only a lack of funds that prevented me from buying Speedmaster Snoopy back then. Ever since, I have longed for one, but also noticed that over the years they became increasingly difficult to find, at least for a reasonable price. Recently, I decided to go for it despite the high price (compared to that of a standard Omega Speedmaster Professional). I justified the purchase by telling myself that the longer I’d wait, the more expensive it would get, anyway, right? You can read about the efforts I made to obtain the Speedmaster Snoopy here. After showing my precious new Speedmaster Professional with a Snoopy (turned into an astronaut) to some people, a number of them asked why I wanted a cartoon character on the dial of my watch. I was already aware that many people had this perception of the Speedmaster with the Snoopy dial, also given the fact that it was initially sold to a lot of women (women seem to love Snoopy a lot).

If you are a Speedmaster aficionado as well, and you know a thing or two about the Apollo missions, you probably are already familiar with the use of Snoopy by NASA. In 1968, NASA chose the famous beagle as an icon to act as a sort of “watchdog” over its missions. In the same year, NASA decided to use a sterling silver Snoopy pin as a sign of appreciation to NASA employees and contractors together with a commendation letter and a signed framed Snoopy certificate. Each of the sterling silver Snoopy label pins has been flown during a NASA mission. Cartoonist Charles M. Schulz, who created the “Peanuts” comic strip (featuring Snoopy and Charlie Brown) was a supporter of the NASA Apollo missions and agreed to let them use “Snoopy the astronaut” at no cost and even drew the Snoopy figure for the sterling silver label pin.

In May 1969, the Apollo 10 mission flew to the moon to do the final checks in order for the following mission, Apollo 11, to land on the Moon. The Apollo 10 mission required the LM (lunar module) to check the moon’s surface from nearby and “snoop around” to find a landing site for Apollo 11. Because of this, the Apollo 10 crew (Gene Cernan, John Young and Thomas Stafford) named the LM “Snoopy.” The Apollo CM (command module) was nicknamed “Charlie Brown.” Fast-forward to 1970. In the interim, humans had set foot on the moon and, about one year later, the Apollo 13 mission was meant to bring another team of NASA astronauts to the Moon (Lovell, Swigert and Haise). The mission’s objective was to explorer a certain area on the moon called the Fra Mauro formation. It didn’t get that far, as there was an explosion on board the service module at approximately 200,000 miles distance from Earth.

NASA’s ground control came up with a solution in the end, which required the astronauts to get creative with some materials on board their module. After fixes were made and all systems worked (more or less) again, the crew started their journey to Earth. This is the really quick version of the story of course; the entire adventure is depicted in the 1995 movie, Apollo 13, starringTom Hanks (an avid Speedmaster wearer himself, probably becoming one after his role in this movie). Now comes the part where the Speedmaster played an important role. The Apollo 13 crew needed the Omega Speedmaster watch, first to time ignition of the rockets to shorten the estimated length of the return to Earth, and secondly, to time the ignition of the rockets to decrease speed and raise the flight path angle for re-entry into the Earth’s atmosphere. This second operation was crucial, since any mistake in the timing could have led to an incorrect entry angle and, as a result, potential disaster for the crew. As explained before, NASA used the Snoopy award for special contributions and outstanding efforts from both NASA personnel and contractors. On October 5th, 1970, NASA gave the Omega Speedmaster a Snoopy award to acknowledge the crucial role the watch played during the Apollo 13 mission.