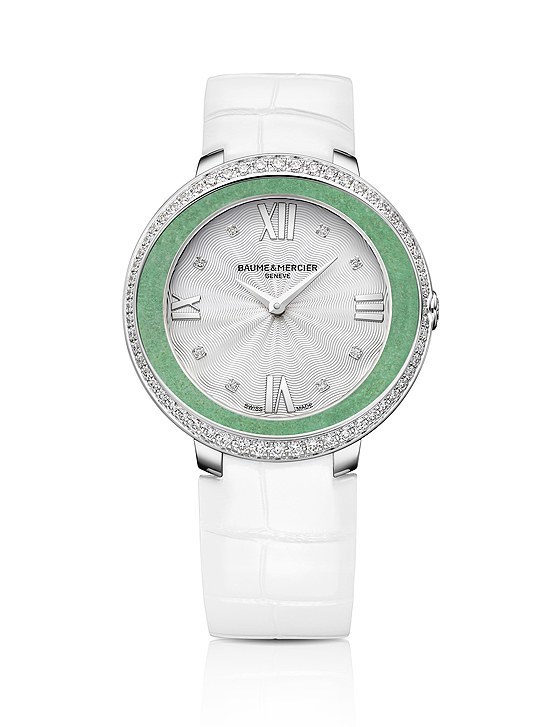 Baume & Mercier celebrates its 185th anniversary this year, marking the occasion by introducing a pocketwatch with a rare complication, a five-minute repeater, at Watches & Wonders, held in Hong Kong last week. The brand also introduced a ladies’ quartz watch, the Jade Promesse, at the show. It is set with a jade bezel as an homage to Asian and Chinese cultures.

The Clifton 1830 Pocket watch is named for the year Baume & Mercier was founded, nearly 200 years ago. The five-minute repeater function is a type of chiming complication that predates the minute repeater. It works by first chiming the hours (with a low note) and then chiming the number of five-minute intervals past the hour (with a high and low note for each elapsed five-minute interval). This type of chime doesn’t mark time as closely to the minute as a minute repeater (which chimes hours, minutes, and seconds) does, but it does mark time more specifically than the quarter repeater, which chimes hours followed by the nearest quarter-hour.

With an 18k rose gold case, applied numerals and an opaline dial, the Baume & Mercier Clifton 1830 is a pure, classical two-handed watch, with a dress-watch refinement that represents the signature look of Baume & Mercier, and particularly that of the Clifton collection. It contains the hand-wound Caliber D73, with a Dubois Dépraz module, a power reserve of 46 hours, and a standard frequency of 2.5 Hz. It can be viewed through a sapphire crystal on the caseback, which also reveals skeletonized bridges with côtes de Genève decoration and prominent blued steel screws. The watch is a limited edition of 30 pieces worldwide (commemorating the “30” in “1830”), and is priced at $54,000 in rose gold on a leather strap.

The latest in the recently introduced Baume & Mercier Promesse ladies’ watch collection, the Promesse Jade (below) is so-named for its bezel made of jade, an opaque gem widely used in Asia, where it is considered a symbol of love and lifetime commitment. The off-round ring of jade is accented on the outer bezel with 60 diamonds, and surrounds a guilloché dial. It will be made in a limited series of eight, a lucky number in Asian culture. The movement is quartz.