Cue the suspenseful music because the H140 Carbon Limited Edition is the kind of watch that deserves a soundtrack. Wearing Clerc’s latest rendition of its Hydroscaph Chronograph felt like strapping on equipment for a covert mission. Though most wearers will utilize the chronograph for pediastrian purposes, this watch would just as easily accompany an operative on a classfied, black ops mission. Previously, we highlighted the range of Clerc’s exploration machines as well as the Hydroscaph’s unique design, and the H140 Carbon Limited Edition builds on previous achievements with a stealth offering. The best thing about this watch, and there are many aspects to review, many superlatives to offer, but the best thing about this watch is how it makes you feel. You feel like your life has become a Hollywood action movie. 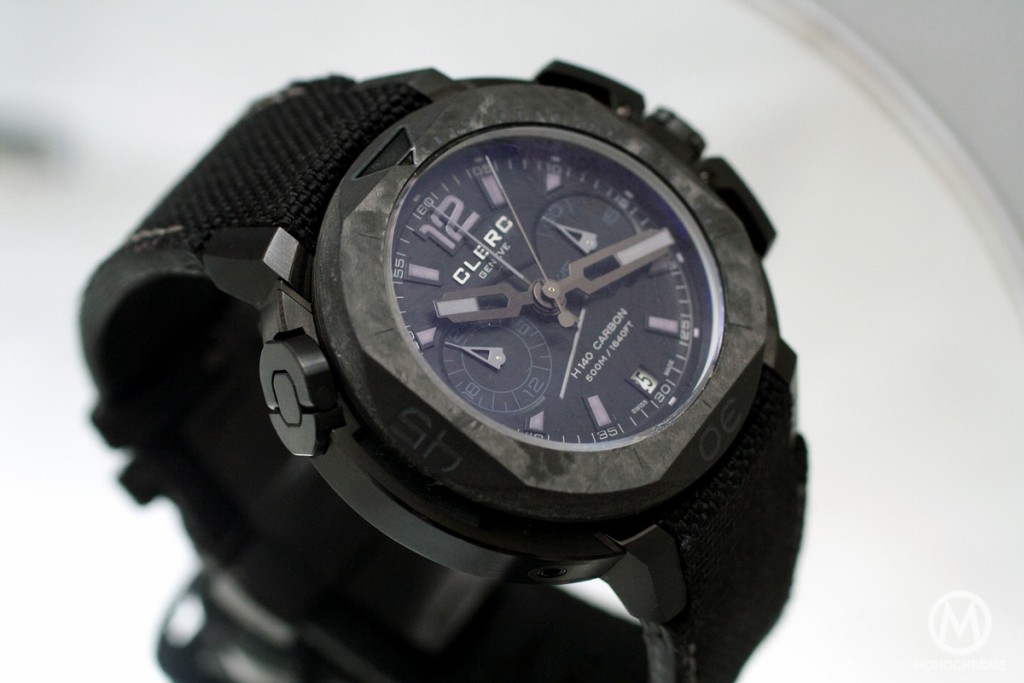 The first thing you notice, mind you on a watch that tries to avoid detection, is the carbon. The technical carbon materials used match rugged strength with lighter weight. Though the black-out dial and DLC black case let this watch blend ninja-like with the shadows, the bezel’s distinctive carbon pattern is instantly discernable. Clerc’s characteristic square-within-a-circle bezel showcases the carbon, which because of its construction gives each bezel a unique mottled pattern. Though the market for a stealth watch is specific, few offerings come with this level of sophistication and engineering. Many buyers who had never considered a recon-ready watch might find the H140 Carbon’s charm to be irresistible.

When discussing features, the carbon material moves to the head of the line. The carbon is a composition construction, or CCFC (Composite Carbon Fiber Construction), which uses ultra-thin carbon layers of 30 microns. These layers are positioned with each weave at a forty-five degree angle, injected with resin, and then heated. Additional heating, makes the material easier to machine, allowing the side cuts of the bezel or other imaginative possibilities. The strength of the CCFC carbon means this watch has the durability for the most grueling adventures; think if not special forces, then mountaineering, whitewater rafting, sky diving, skiing, spelunking, scuba diving or whatever other activity occurs in the varied elements of mother nature.

Moving from form to function, there is the central chronograph, which records time with two central hands: a chronograph seconds hand and a chronograph minutes hand. In a watch designed to minimize visibility, two large central hands are easier to read than two small sub-dials. Two large triggers, instead of the typical chronograph pushers, add ease-of-use, but more importantly solve the water resistence dilemna of putting a chrongraph function in a dive watch. The triggers push small diameter stems into the case, and smaller diameter stems mean smaller case openings and smaller gaskets.

The bezel crank insures the safety of the bezel setting with its C/CLIP locking safety. The retractable key is easy to deploy, easy to grip, and easy to turn the bezel. The gear edged crown also aids grip and ease of use.

The strap comes in either vulcanized rubber, louisiana alligator or, as was the case with the watch reviewed, Cordura. The Cordura strap showed minor fraying around some of its holes and edges, so we might prefer the rubber strap. The carbon material is also a part of the deployment clasp – a nice touch.

The exclusive calibre C608 is a central chronograph movement supplied by Dubois Dépraz that features a circularly vented rotor, hand-finished bridges, and 51 jewels. The 4 Hz movement offers 44 hours of power reserve. All the Clerc Hydroscaph Chronographs use this movment, but in a stealth offering, its increased legibility makes the choice of a central chronograph, a superior offering. Bravo.

Clerc Hydroscaph chronographs are a parade of limited editions, and for the company’s 140 anniversary, the H140 Carbon fits solidly within the Hydroscaph family, but also stands apart with its CCFC carbon. Being a stealth watch, the H140 Carbon might seem to be a particular watch for only a niche market, but its strong execution is likely to win new converts. Putting the watch on the wrist might be all that is necessary to finalize a sale because when a watch is a go-anywhere, do-anything kind of watch, its owner can live without limitations.