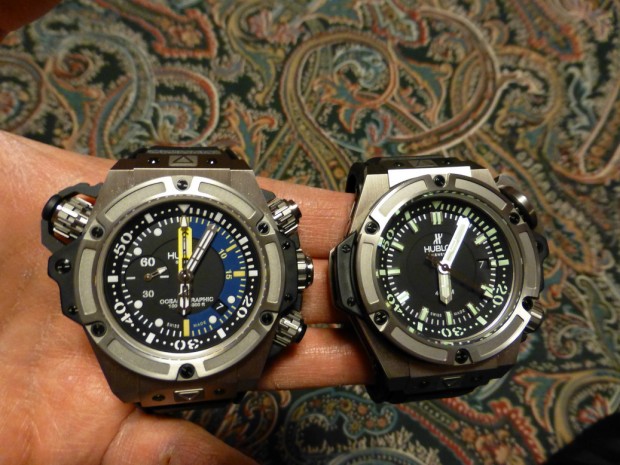 It shouldn’t come as a surprise to you that Hublot is actively involved as a sponsor in the continuing exploration of the famous Antikythera shipwreck – especially since the brand has already launched different watches based on the legendary, ancient mechanism.

Apart from that, Hublot also introduced a dedicated version of its 4,000-meter-water-resistant dive watch, the Hublot Oceanographic, shortly after the first tests of its branded exosuit (below) were conducted — even though such a suit is much more like a man-sized submarine than a traditional diving suit, and thus the person operating it wouldn’t need an external dive watch at all.

The real surprise, however, comes in the form of a yellow underwater drone that Hublot specifically developed for the last scientific expedition to the shipwreck. With it, the Swiss brand becomes a much more integral part of the exploration than if it were merely providing funds in exchange for a logo placement.

Mathias Buttet, Head of Research and Development at Hublot, was kind enough to explain some of the design features of this remote-controlled drone, which has helped reduce the number of manned dives significantly and counts among its many functions the capability of removing sediment with a water jet.

The drone is equipped with several cameras, which should allow a much more thorough exploration of the wreck as well as more focused planning for manned dives.

In short, even though this Hublot device can be neither worn nor purchased, it is in its way as impressive as the Oceanographic 1000 or 4000 – and a great example of how Hublot has started to not only fusing materials, but disciplines as well.