IWC incorporated a handful of design revisions — some subtle, others less so — in the new Pilot’s Watches it introduced at this year’s SIHH. Most of these were aesthetic revamps, but one new watch in particular boasts a major new technical advance as well. The IWC Pilot’s Watch Timezoner Chronograph caught our attention with its all-new, easy-to-use time zone function, in which the wearer can set a new zone simply by using the bezel.

The IWC Pilot’s watch Timezoner Chronograph (Ref. IW39501) is designed to quickly and easily re-set the time, along with the date and 24-hour hand, in a single motion. The wearer simply presses the city-ring bezel down, turns it so the city representing the desired time zone is at 12 o’clock, and release. Both the hour hand and the small, red-tipped 24-hour hand will move synchronously with the turning of the bezel, and the date display will also change accordingly, either forward or backward. Furthermore, the 24-hour hand, which indicates the time on an inner ring, ensures that the wearer always will know whether it is day or night in his selected time zone. The advance of the minute hand, and all the watch’s other functions, are unaffected while changing time zones.

The sprung-rotating bezel technology used for the function is one that IWC has used previously, first in the 1980s with its Porsche Design Ocean 2000 watch and more recently for the external/internal rotating bezel system on its revamped Aquatimer models. It ensures that the bezel moves only when pressure is exerted on it from opposite sides (thumb and index finger), releasing the lock and protecting the ring from inadvertant rotations. When the pressure is released, a spring mechanism returns it to its original locked position.

The polished black bezel features not only the names of the 24 cities but a small “S” indication alongside each locale that uses “Summer” or Daylight Savings time. The inscription “UTC” for Universal Time Coordinated appears below “London,” showing the current Greenwich Mean Time (GMT). 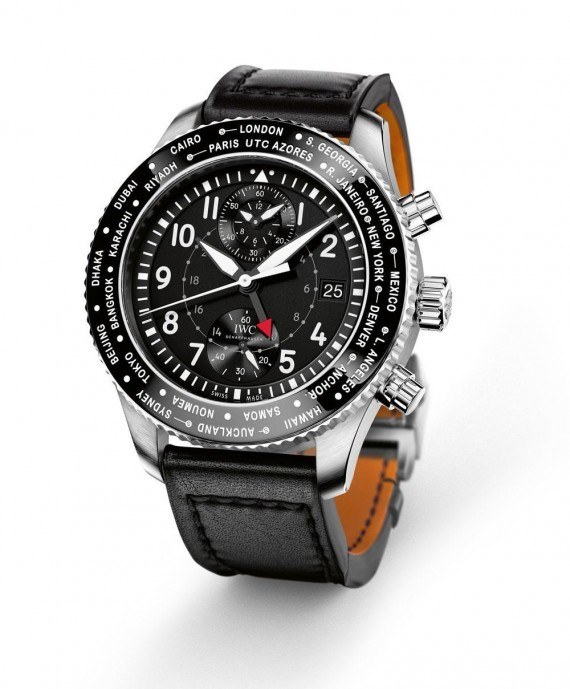 In addition to the easy-to-use time-zone-reset function, the watch, powered by IWC’s automatic Caliber 89760, features a chronograph function with a similarly user-friendly readout for stopped times: a subdial at 12 o’clock features two hands indicating the stopwatch minutes and hours in an analog-type display. It is also equipped with an integrated flyback function that allows the user to instantly return the chrono hands to zero and begin a new timing sequence. In addition to the chronograph counter subdial, the dial showcases a small (hacking) seconds display on the subdial at 6 o’clock and a date window at 3 o’clock.

The movement, which boasts a 68-hour power reserve, is housed in a 45-mm stainless steel case, with a convex, nonreflective sapphire crystal covering the dial and a solid steel caseback with an engraved depiction of a Junkers Ju 52 plane — the most common civilian aircraft of the 1930s era that gave birth to IWC’s original pilots’ watches. The IWC Pilot’s Watch Timezoner Chronograph comes on a black Santoni calfskin strap and carries a retail price of $10,900.