For the 75th anniversary of this watch, IWC released the Portugieser Ref. 5102, a hand-wound piece that after a full wind can keep ticking for up to 192 hours. Available in either stainless steel or 18k rose gold — at $11,400 and $21,200 respectively —  this watch, according to IWC, strives to “lean heavily on the purist design code of the original Portugieser of the 1930s,” and from what I can tell it is a job well done. From the 43-mm case to the vintage, corporate IWC logo, from the feuille hour and minute hands to a seconds subdial, this watch takes many direct inspirations to help recreate the early Portugieser Ref. 325 (the original reference). Some of the more modern, and noticeable, features of the piece are the clear caseback, a 6 o’clock date display, and the eight-day-power-reserve IWC Caliber 59215. 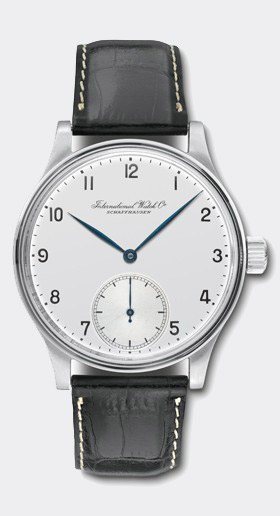 However popular the IWC Portugieser is today, it is worth noting that between 1939 and 1981 only about 700 of the Ref. 325 models were actually manufactured. Due to this, this style of watch has the opportunity to become much more “its own” piece than if it were to have had a long initial following; regardless, IWC still chose to honor these earlier models in the Portugieser line. The piece, compared to the Ref. 325, is a very similar watch. In 1939, a 43-mm watch case was an anomaly, but today is in line with modern tastes, and the vintage-inspired, retro Arabic numerals, logo, and hands help it stand out as both tasteful and unique.

The few modern touches IWC added that are outside of the lineage help contribute to the timepiece’s overall appeal: a date display is a useful tool and, considering the starting price of $11,400, a nice feature. The clear caseback is helpful to appreciate the mechanics. And what I feel is one of the best features on the watch is the power-reserve indicator that displays what’s left of the movement’s eight-day charge. The only question I would ask is why is there an almost $10,000 price increase for the change in metal? While the rose-gold version is limited to 175 pieces and the stainless steel at 750, it seems that you would be paying more for exclusivity rather than tangible enhancement.

The next watch we’ll look at this week is the Portugieser Chronograph Ref. 3714, possibly IWC’s most popular watch. This watch uses an automatic IWC Caliber 79350 with a 44-hour power reserve, is also housed in either an 18k rose-gold or stainless steel case, and is just under 41 mm in diameter. The dial is available in either black, silver-plated white, or a sun-burst black known as ardoise, and most of the variations include nautical blue accents on either the hands or Arabic hour markers. With two vertical chronograph subdials and handsomely simple pushers, this model starts around $7,900 for the steel version, and $17,500 for the rose gold.

The Portugieser Chronograph is a modern watch released in the late 1990s, and naturally there is going to be some very modern differences between it and the more historical Ref. 325. This is not to say that the Ref. 3714 doesn’t have some vintage appeal, but overall it is a rather contemporary piece — and, as it is one of IWC’s most successful watches in its history, I imagine the company would prefer to keep it that way. With that said, the watch does continue to use the Portugieser’s signature feuille hour and minute hands, a similar case shape to past references, and a similarly thick crown. Personally, I don’t find the Ref. 3714 all that inspiring, but that has more to do with my personal tastes for smaller and bolder pieces rather than the actual construction of the watch.

The modern IWC Portugieser has been able to solidify itself as one of the more iconic watches available. While there are many other vintage recreations and modern models that I would pursue before an IWC, I do understand why so many people both appreciate the brand and its watches. The Portugieser Ref. 5102 is a nice watch in its own right, and one that I do not think IWC will have any problems selling. Meanwhile, the Ref. 3714 is a modern watch that has become one of the brand’s more recognizable pieces today. As a modern-day watch brand with both a vintage story and contemporary success, the world of horology is always looking to see where the brand will go next.

Caleb Anderson is the Director of Outreach at the online vintage and antique watch boutique theoandharris.com. Since starting at Theo & Harris, he has garnered extensive knowledge on vintage watches, and spends much of his time sharing his opinions within the field. Currently located near New York City, he is a persistent student in all things historical, a writer on watches, and a casual runner.