Mido is a name that has been popping up on worn&wound with more frequency as of late. The Swatch Group owned brand is not new by any means, they just had focused on non-US markets for the majority of their life span. Now, however, they are pushing in to the states following the success of Tissot and Hamilton, who they share a general price category with. As I mentioned when we first introduced their Baroncelli Heritage watch (which we later did a hands-on with post Basel), what’s great about Mido becoming more available is that they have a nice range of well-priced dress and business-casual watches. A genre I feel is often underserved in at the price point we discuss.

Today we’ll be looking at the Mido Commander II, which as the name suggests is the sequel to a classic Mido luxury  watch. A bit larger and more contemporary, the Commander II has a retro style without feeling like a remake. It has an interesting character of its own with its circular case, integrated bracelet and textured dial. Since it’s Swatch Group, inside it’s powered by an ETA automatic movement. In this case, the Caliber 80.611, which features an 80-hr power reserve. Coming in at a retail price of $920, it’s a decent value for a Swiss-made automatic, let alone one with an 80-hr reserve, which typically cost over $1,000 these days. 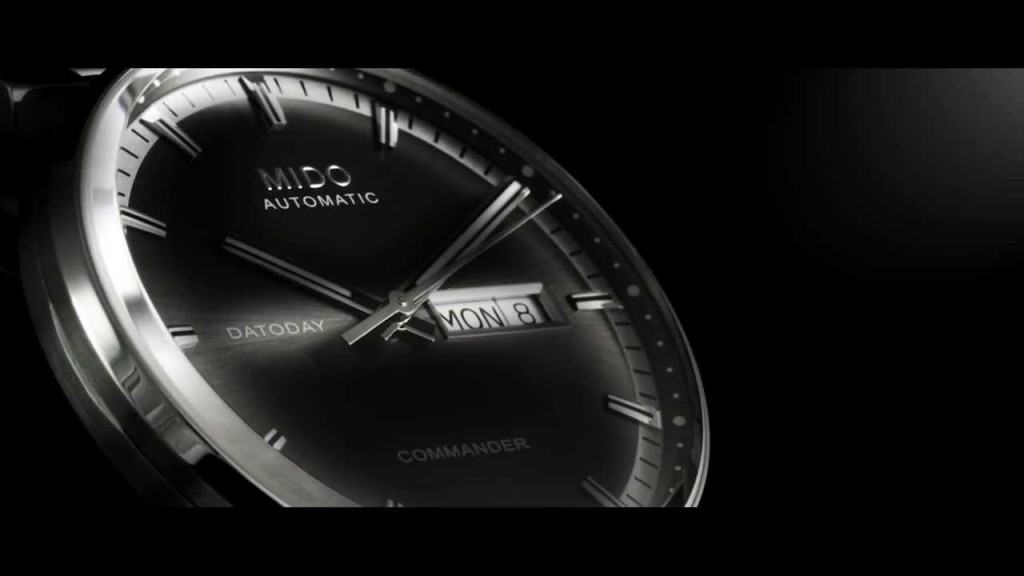 The Commander II features a modernized take on a vintage design. It’s a bit larger, and has some interesting contours. Before getting into that, it’s worth noting that the Commander II is available with lugs or with an integrated bracelet, as seen here. Typically, I go for lugged watches, as one can change the strap on them, but with the Commander II, I felt that the integrated design offered a more complete and considered aesthetic. Does it come at the cost of convenience? Of course, but it just looks right on the watch, and makes it wear very nicely.

The dial of the Commander II mixes texture and finishing with applied markers for a handsome effect. The inner surface of the model reviewed is a dark gray with a sunburst finish. I’m sometimes on the fence about sunburst as it can be a bit plasticky feeling, but here it looks great. The gray is quite dark, so the beams of reflected light in throws are tempered and add some depth. Around the inner surface is a ring of light, matte silver. This contrasts the inner area, framing it, adding a slightly sporty feel.

The primary index rests on top of both of these surfaces, consisting of 12 identical applied markers. Each marker is quite complex, with a faceted ramp shape that adds some glints of light as the dial moves around. On top of the markers are three lines, consisting of a black line flanked by thin lines of BGW9 lume. In the light, the stripes add a texture of there own, each creating an area of density. In the dark, the lines of lume have a cool, stylized effect. It’s a very thin area so they don’t glow that bright, but it looks nice. Between each marker are thin black lines per minute/second.

The Mido Commander II watches are a great option for someone looking to add something a bit more formal to their collection, but still want a good everyday watch. Handsome, refined, well made and just different enough from everything else to stand out. The model shown is also only the tip of the iceberg as far as the Commander watches go. There are ones with lugs and straps, lugs and bracelets, dial variations, Chronometer rated models, chronographs, ladies sizes and more. So, if this one intrigued you, but perhaps didn’t win you over, they might very likely haven’t a variant that will.

I however really did enjoy this model. I love grey, so the monochromatic palette did it for me, but I also like the integrated bracelet. Perhaps it is just because I don’t own anything like that or typically am drawn to it, that I found the the experience interesting. From a design perspective, it makes a lot of sense. It’s a complete and coherent vision. From the consumer perspective, it simplifies things. No need to worry about matching the strap to anything, just grab it and go (though I suppose that is true with bracelets in general). Lastly, with an MSRP of $920, it’s very fairly priced. Good build, good finishing, 80-hr power reserve, stylish… speaks for itself.