For those of us without deep pockets, Orient watches  price present an incredible value. With their solid built quality, reliable workhorse movements (in-house, I might add), and often pleasing designs, they are hard to argue against, and they’re often on the short list when people ask us to point them in the direction of affordable and well-built mechanical watches.

One thing that Orient does exceptionally well is dress pieces. The ever-popular Bambino series is a great case in point, as are numerous watches across their Star and Classic collections. Today, we’re going hands-on with a new member to the latter–the Monarch. 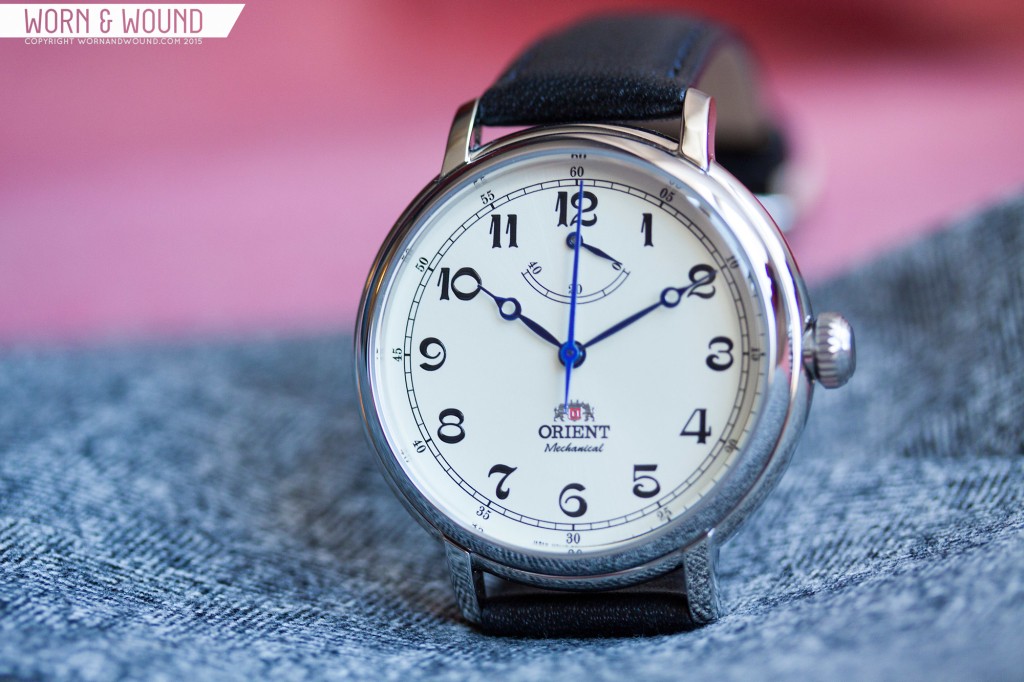 Introduced in early Fall 2015, the Monarch is a unique vintage-inspired addition to the Orient family. I say unique because it is one of the few manual winders in the brand’s catalogue. Beyond that, it also features a domed sapphire crystal, a power-reserve indicator, and an exhibition case back–elements not often seen on a watch priced at a MSRP of $335, but even less so in a watch costing $234.50, which is the price after coupon. Let’s take a closer look.

The Monarch features a polished stainless steel case coming in at 40 x 45 x 13mm. It’s a great modern size for an Orient fashion watch, but perhaps a bit larger than I would prefer for a dressier piece both in terms of diameter and height. Nevertheless, the bubble-like case wears well on the wrist, and it feels somewhat smaller than what its dimensions might suggest. This is achieved through the subdued lug-to-lug length (relative to the diameter of the case), and the break between the mid-case and the bezel. The watch also settles quite a bit into the wrist, so the 13mm height isn’t as obvious when worn. One of my favorite case details is the exaggerated onion crown, which has a slight tube at its base resulting in a small protrusion that recalls vintage pieces and also results in a much easier grip for winding.

Orient describes the color of the dial as eggshell, but I would liken it more to a silvery white with a discrete sunray finish. Sunray dials can be a mixed bag depending on the execution, which in the case of the Monarch is actually quite nice. The finish here is subtle, so much so that you do not immediately notice that it’s there. It’s a nicer choice than just plain white, which can at times look flat and plasticky if done wrong.

The 48C40 driving the Monarch is a basic but wholly effective workhorse from Orient. It has 21 jewels, a beat rate of 21,600bph, it hacks, and it features a power reserve indicator. Initially, the 48C40 was used through Orient’s pocket watch range, which makes sense given that it’s one of the few manual Orient calibers (a similar movement was also used in the manual wind collection Orient released five years ago commemorating its 60th anniversary).  Overall, it’s solidly built and reliable. With that said, it really isn’t worth seeing through a case back. It’s not a particularly attractive caliber, featuring a large plate meant to cover up the fact that this is essentially an automatic movement with the self-winding bits removed.

The Orient Monarch is another great addition to the Orient stable. It’s a great companion to the ever-popular Bambino, and with a price tag that isn’t much greater there is a lot of bang for the buck here. It’s one to consider if you need a daily work watch, and it’s also different enough that it can find a spot in a collection without feeling redundant.

The Monarch is available in two other flavors: white dial with a gold-plated case, and a black dial with a stainless steel case. To purchase, head over to Orient Watch USA. Don’t forget to use discount code ‘WORNANDWOUND’ for 30% off, bringing the price down to $234.50