Jump hours are one of the more uncommon, but cool complications you can find on a watch. Well, in my opinion that is. By removing the hour hand and creating a digital readout, one that in a true jump hour instantly changes at the top of the hour, you get something that is both interesting and practical. Jump hours are really easy to read at a glance. Visually, they are then just intriguing pieces that, depending on the design, will have a very different look and feel from you standard three-hander.

Jump hours are so uncommon that we’ve actually only have reviewed one in the history of w&w. Well, today we’re going to change that with the Oris Artelier Jumping Hour. Part of one their dressier lines, the Jumping Hour stands out from the collection not just because of the complication, but also for having a rather unmistakeable, heavily textured dial. Using a Dubois Depraz module on a Sellita SW 300-1 movement, the Oris Artelier Jumping Hour has a price tag of $4,600, making it an expensive piece. Whether the complications justifies the cost, is the question. 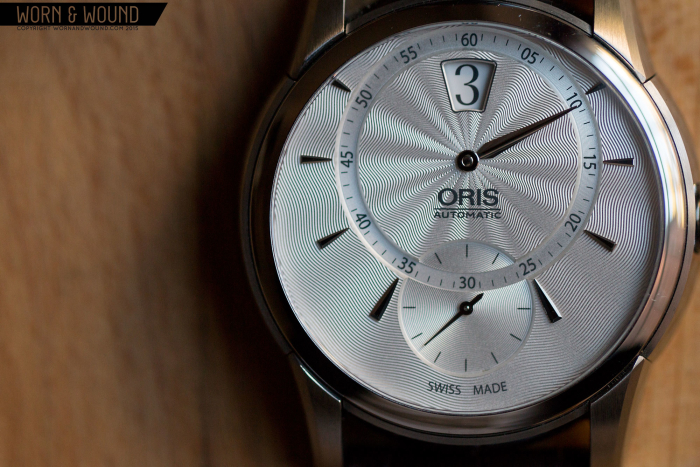 The case of the Oris Jumping Hour is simple at a glance, but reveals a mix of interesting geometry and superb finishing upon closer inspection. Measuring 40.5 x 47 x 11.3mm it’s a solid watch that is perhaps large to be a classic dress watch, but a nice size as a formal leaning everyday watch. That said, the size is actually tempered by the conical design of the case. The case tapers towards the crystal, getting narrower as it goes up. So, it’s only 40.5 at the case back, but at the bezel it’s closer to 38mm. Thus, when you look down at it, it appears smaller than it is.

The conical shape isn’t the only interesting detail. The lugs, which are thick and a touch sporty with their aggressive angles, are actually part of the case back rather than mid-case. They come up, fitting perfectly in indentations on the case side, and finish just above the mid case. From above, the lugs appear to cut through, and attach straight to the bezel. The result of all this is some nice complexity that while subtle, adds to the overall look and luxurious feel of the watch. These are details that require great machining and precise tolerances to pull off cleanly.

In terms of finishing, the case is predominantly polished, but features just enough brushing to have some nice texture and surface variation. The top edge of the mid-case, just before the bezel, has a nice bevel going all around which is brushed. Then the top of the lugs and beveled edge of the lugs are also brushed. The quality of the brushing is noticeably nicer than average. It’s a slightly coarser grain of brushing with very clear grain direction. The edges between the polished and brushed areas are also super clean and sharp.

Striking and beautiful, the dial of the Artelier Jumping Hour is unlike any other dial I’ve encountered. There are a few things that immediately jump out at you; the silver color, the cascading textures, the deep grooves…but what caught my eye first was the decentralized layout. If the large window at 12 wasn’t indication enough that this isn’t your everyday watch, certainly the fact that the minutes hand is off-center will. As is clear from the name, the window is for the hour numeral, which jumps at the top of hour, giving you a “digital” read out, but the decentralized minutes is a quirky bonus from the jump hour module.

The rest of the dial functions like a regulateur,with areas of the surface being just decorative. Encircling the minute hand is a deeply recessed index with numerals at intervals of 5 and small lines per individual minute. This creates a mini dial on the top half of the surface. Below at 6, is a sub-seconds dial, also deeply depressed into the main surface. The minute index and sub-seconds overlap, creating an interesting moment where various indexes and textures collide.

Dubois Depraz, if you haven’t heard of them, is an over-a-century old complication manufacturer, whose modules you’ve likely come across, even if the brand didn’t make it totally obvious. For example, most of the bi-register automatic chronographs out on the market right now, say by Bell&Ross, Tudor or Junghans, use ETA 2892 or Sellita base movements with Depraz modular chronographs.