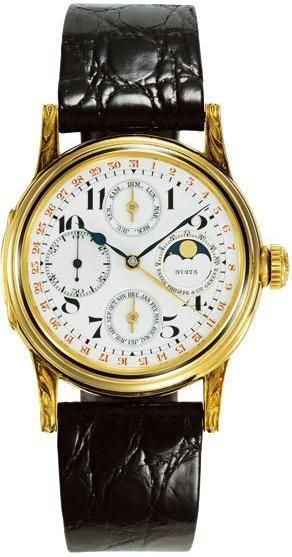 That this, the world’s first perpetual calendar wristwatch, ever came to be is due chiefly to chance. Patek Philippe originally made the movement, which bears the number 97975, for a women’s pendant watch. Completed in 1898, the watch found no takers despite one interesting feature: its calendar hands jumped instantaneously to the next day at the stroke of midnight, rather than creeping forward slowly, as on conventional calendar watches. The watch stayed on the shelf until 1925, when the growing popularity of wristwatches inspired Patek Philippe to put the movement into a wristwatch case. The watch was finally sold on Oct. 13, 1927.