In the year 1995, the House of Perrelet produced a first of its kind, “double rotor” movement, in which they connected the rotor on their automatic movement to a rotor on the dial side of the watch. Such a creation provided a great canvas for the brand to express a new dimension of creativity. It was an exploration into this dimension that ultimately gave birth to their Turbine collection in 2009. Here, Perrelet took advantage of the dial side rotor concept and fashioned it into a turbine with 12 freely turning blades. 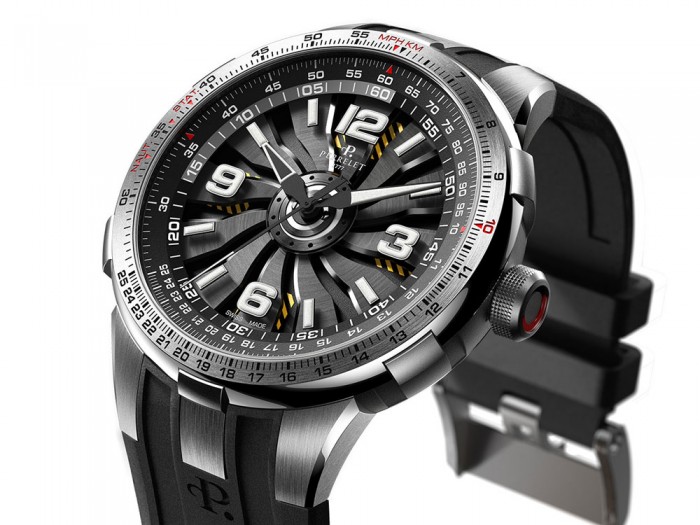 However, with a name like Turbine, and a contraption that looks like turbines on airplane engines, it was only a matter of time before wonderment took over and put that name and visual connotation together to produce a serious aeronautical pilot watch with attitude to boot. And so in 2014, Perrelet birthed the Turbine Pilot.

The Turbine Pilot starts off with a 48mm stainless steel case, offered on its own or in a black PVD treated version with sapphire crystal used on the front, back and inside – yes, inside. Let me explain myself. You see, on the dial side there are the 12 blades to the turbine (made of titanium no less). Right on top of that, the luminous Arabic numerals (3, 6, 9 & 12) and hour-markers are actually mounted on a piece sapphire crystal themselves. The different layers that form the dial give the watch a 3 dimensionality that is absolutely captivating. Especially with the hour markers applied on sapphire glass that make these elements seem like they are afloat over the freely rotating turbine.

Next let’s focus on the case’s bezel which pairs with an internal bi-directional rotating ring to form a circular aviation slide rule. The internal ring operates using the watch’s crown at 3 o’clock. A more discreet crown at 9 o’clock can be used to adjust the time. 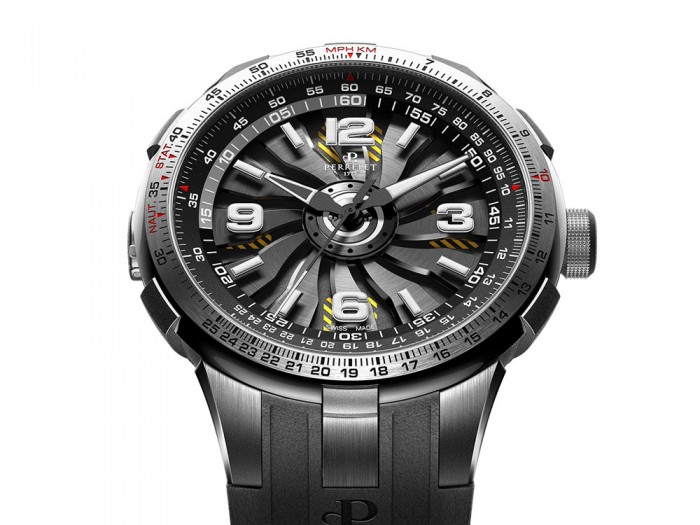 Perrelet’s Turbine Pilot is powered by their own in-house automatic movement, caliber P-331, which holds a 42-hour power reserve when fully wound. As much as the watch is a very utilitarian piece, the movement though is respectfully finished with circular graining and rhodium plating on the main-plate. Likewise the bridges are decorated with Côtes de Genève and rhodium plating.

This year in 2015, Perrelet is taking it upon themselves to offer yet another look and feel with the Turbine Pilot. Termed Brown Turbine, the watch is again offered in a stainless steel case on its own or a brown PVD treated case, with a black PVD treated bezel version. The notable difference between the Turbine Pilot and Brown Turbine, really being the smooth chocolate colored treatments on the latter.

As mentioned previously, the Turbine Pilot is offered with 2 case options. Multiply that with 2 types of strap options: a black bi-material (PU/calfskin) leather strap and a black rubber strap, and what you have are essentially 4 choices with the Turbine Pilot. The 2 types of Brown Turbine are offered with the same brown leather strap. A good bit of attention to detail in the watch is that the pin buckle offered in each permutation matches up to its case type; that is the pin buckle comes in stainless steel for the stainless steel and vice versa for the PVD treated case.