Richard Mille will launch a new watch styled after the brand’s original icon – the RM 010 – in a case that is only 7.75 mm thick. The RM 67-01 Automatic Extra Flat is sleeker and presumably more comfortable than the RM 010, without giving up the technical performance, robustness, or three-dimensional look that have become a signature of the brand.

From Arabic numerals crafted of solid metal and mounted on two titanium rails, and attached directly to the movement – to the large, openwork winding barrel, rotor, going train and bridges – the designers have achieved the desired appearance of depth, all within a new movement measuring a mere 3.6 mm thick. 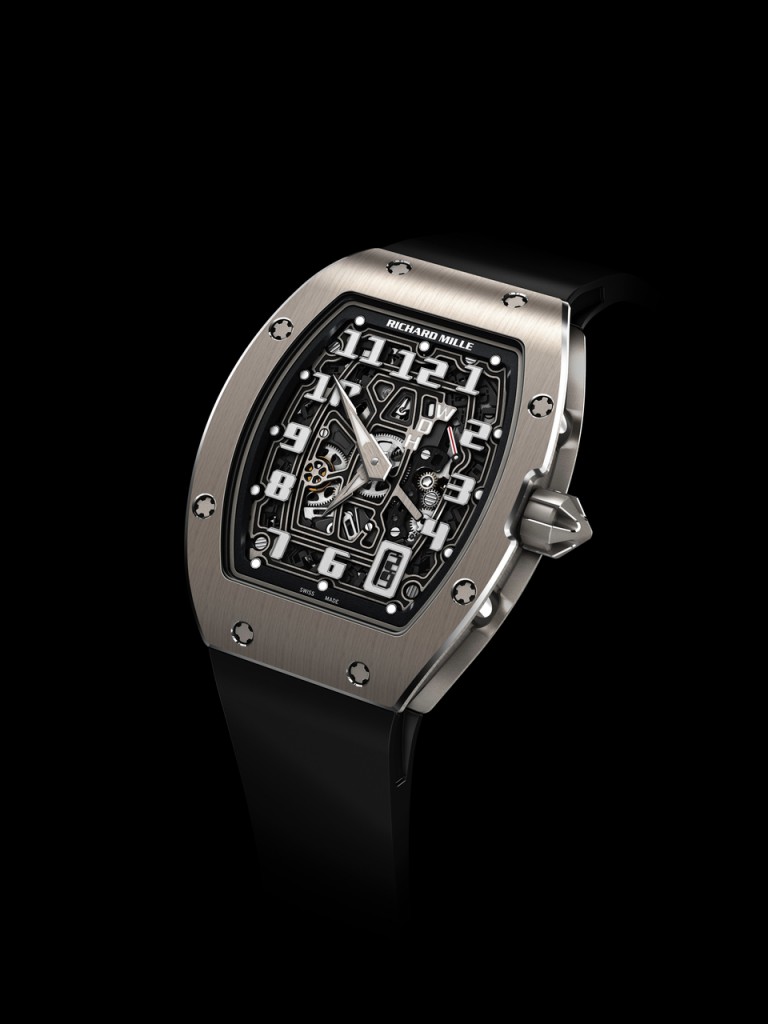 Crafted from titanium, the tonneau-shaped case measures 38.7 mm x 47.52 mm x 7.75 mm and features brushed and satin finished surfaces. Powering the watch is a movement that was ““designed in-house by the engineers in Les Breuleux,” according to Richard Mille. Like the case, much of the movement is made from titanium as well, including the mainplate and bridges, which are finished with a combination of gray and black electro plasma treatment.

The caseback is clear, offering a rear view of the skeletonized movement, including the openwork oscillating weight that is in platinum and is mounted on ceramic ball bearings.

Running at 4Hz, the 25 jewels movement can run autonomously for up to 50-hours. Functions include hours, minutes, semi-instantaneous date, and a function indicator. The function indicator allows the wearer to see the winding, date-setting, and hand-setting modes that are activated as the crown is pulled out. Each position is indicated via a hand at 2 o’clock displaying the following functions: W (Winding), D (Date), and H (Hand-setting).

Interestingly, as is the case with any Richard Mille timepiece, details that seem small, such as the three slotted screws on the dial side are, are unusual in that they turn in an opposite direction compared to normal screws. Moreover, custom-made torque screws are seen throughout the movement, which ensure correct tension according to their respective application.