Omega Seamaster (1948)René Bannwart is considered the father of the Omega Seamaster line. The man who would later found Corum had begun building Omega’s design department in 1940. This was new. At that time, sketches for new models were usually drawn by draftsmen in watch-case factories. Bannwart’s decision set Omega on a new path that other brands would soon follow. To celebrate Omega’s 100th anniversary, Omega sales director Adolphe Vallat asked Bannwart to develop a sporty, robust and waterproof wristwatch. Bannwart felt that Vallat wasn’t giving him enough time, so he presented one of his case designs with the comment “much too clunky.” To Bannwart’s surprise, Vallat was delighted. The result was the Seamaster family. It had its origins in watches supplied to Britain’s Royal Air Force in World War II. The 1948 civilian version of the pilots’ watch had a water-resistant case (to 50 meters), a screwed caseback with lead gaskets, a reinforced crystal, a silvered dial, and polished and riveted Arabic numerals. The version with small seconds, which was also available as a certified chronometer, contained the new automatic Caliber 28.10 RA RG-343. The model with a central seconds hand was the 28.10 RA SC-350. 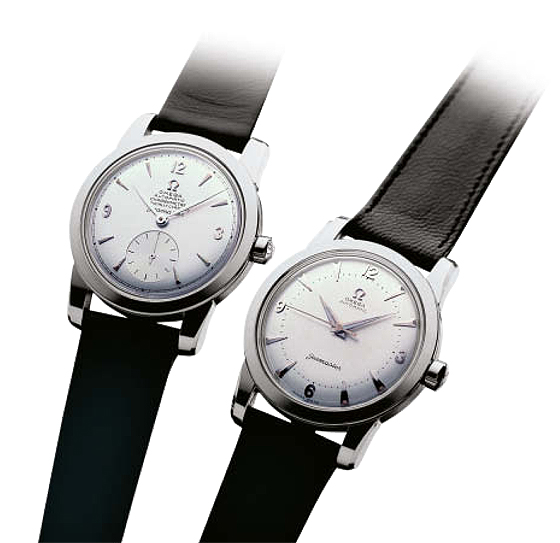