Chopard   is a brand still known more for high jewelry than high horology, which is devoted to making its mark on the men’s luxury watch market. Here are 3 reasons why. 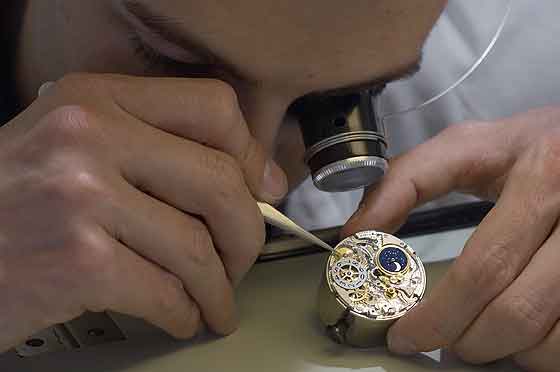 1. Chopard has three facilities, in two Swiss watchmaking cities, devoted to making its watches. Chopard’s main headquarters is in Meyrin, near Geneva. The facility, which comprises 10 buildings with a total surface of 26,000 square meters of space — 5,000 square meters devoted exclusively to production — was built in 1974 and sits on a 40,000-square-meter plot of land. The Scheufele family, headed by the brother-sister management team of Karl-Friedrich and Caroline Scheufele, bought Chopard in 1963 and moved the company into its current digs in 1976. The Meyrin building employs 750 people, representing more than 30 different watch- and jewelry-making specialties. It is in this facility that many of the final stages of the watchmaking process occur: casing of movements, refining of cases, polishing, jewelry setting, and assembly of all Chopard watches that receive the Geneva Hallmark. Chopard HQ also features one of the few in-house gold foundries in the watch and jewelry industry (more on which below). The bulk of watchmaking activity takes place at two Chopard-owned factories in the quiet Swiss town of Fleurier, each with its own specialty — Chopard Manufacture and Fleurier Ébauches.

2. Chopard Manufacture, its facility devoted to high watchmaking, has grown from three employees in 1996 to 136 today. The original structure, located at Rue des Moulins 20 in Fleurier, was erected in 1903 and is an important historical symbol of the town due to the fact that it has been used for watchmaking from its earliest days, beginning in 1920. It underwent two expansions, of its east-west wing in 1947 and of its south wing in 1966, and became a part of Chopard in 1996. Karl-Friedrich Scheufele had been interested from the start in creating horological legitimacy for his brand, and began work on the first Chopard mechanical movements as early as 1993. Under its old name, Fabrique d’ébauches de Fleurier, the factory made movement blanks for Swiss watch manufacturers and was owned by the firm Ebauches SA, which later became part of the movement-making colossus ETA. (ETA, of course, is part of the Swatch Group, from whom Chopard bought the building in 2000.)

3. The renovated, refurbished Chopard Manufacture, at first consisting of one workshop with three watchmakers, now comprises 3,300 square meters of floor space and employs 136 employees in 15 different professions – from R&D engineers to watchmakers (including a handful of grand complication specialists) to movement decorators to case-fitters and inspectors. It is here that Chopard’s L.U.C. base calibers (named for the initials of brand founder Louis-Ulysse Chopard), used in its haute horlogerie L.U.C. watch collection, are produced, largely by hand. Production and casing for certain other Chopard models — including some Happy Sport ladies’ watches and Mille Miglia men’s sport watches — also take place here, under a subcontracting arrangement with Chopard’s Geneva HQ. Each year, Chopard Manufacture produces 5,000 L.U.C. timepieces, all of which are COSC-certified chronometers (and all of whose movements are sent to Meyrin for the final assembly in order to qualify for the Geneva Hallmark). All in all, nine L.U.C. base calibers have been created at the manufacture since its founding.

An Great ‘Look and Learn’ Watches