I’m seeking clarity on the movements used in BR03-92, be it PVD, Ceramic, Limited editions etc. The reason i’m asking is because previously i bought a BR03-92 PVD for my wife, and i was convinced that it is an ETA 2892 inside as i always remembered  Bell & Ross using only ETA in their BR03 models. But recently i stumbled upon a discussion (somewhere else) and turns out that BR03-92 are using either ETA 2892 or SW300. 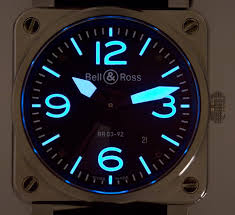 The older models are almost exclusively ETA 2892, but since the swatchgroup has been restricting movements outside their umbrella of companies, B&R has mostly switched to the SW300. It’s safe to say that if you have any new ceramic 03-92 or any steel model newer than the Golden Heritage (2013+), you’re most likely going to be running the SW300.I’ve owned both models of B&R and can safely say the Sellita is just as reliable and keeps just as good, if not better time than the 2892-2.

The SW300 is essentially a clone of the 2892-2 (I think ETA’s patent/tm on the movement has expired). They’re both 28,800 VPH with approximately a 42 hour power reserve. If i remember correctly, the only difference is the direction you spin the crown to use quick set date function.