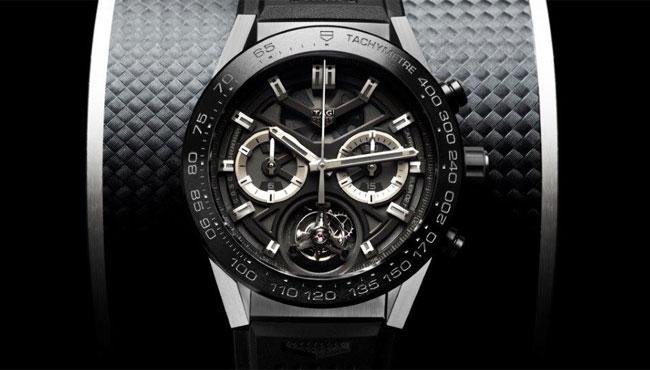 Angus Davies gets ‘hands-on’ with a pre-production version of the new TAG Heuer CARRERA Heuer-02T. This automatic chronograph has COSC certification, features a flying tourbillon and is delivered at a remarkably attractive price-point.

Writing about fine timepieces is an enjoyable profession. The joy of seeing objects of beauty being crafted by the hands of talented artisans is a privilege I would never wish to forgo. There are few spectacles which elicit as much passion in me as seeing a watchmaker masterfully work on a ticking piece of wrist-worn art.

Sadly, there is a downside to my occupation. Despite seeing numerous watches I would dearly love to own, there is the realisation that financial responsibilities and pecuniary limits acquisition.

Noble metals, métiers d’art and complications conspire to seduce and frustrate in equal measure. Whilst I can readily see their intrinsic worth, I have become resigned to never owning some of the most expensive examples of haute horlogerie. Indeed, I would liken this scenario to arriving at a social event whilst knowing my name does not appear on the guest list, where a sense of frustration is likely to ensue.

The tourbillon, invented by Abraham-Louis Breguet and patented in 1801, was originally conceived to counter the negative effects of gravity on the balance spring. Whilst the device continues to aid precision, I think it is the majestic sight of the tourbillon cage continuously rotating which delivers the most appeal and primarily encourages purchase.

Regrettably, I have come to accept that the cost of a tourbillon is beyond my financial grasp and its hypnotic whirlwind motion will forever elude me. However, TAG Heuer has recently proffered hope with the planned release of ‘the only COSC automatic chronograph with Tourbillon produced by the Swiss watch industry for under 15,000 CHF’. Whilst this still remains an expensive watch, it brings the tourbillon complication within reach of a whole new audience.

I recently had the opportunity to handle a pre-production version of the new CARRERA Heuer-02T and appraise its form.

The first thing to notice about the styling of the CARRERA Heuer-02T is that it shares a family likeness with the CARRERA Calibre Heuer-01, released in 2015. The design language is unreservedly modern, reinforcing TAG Heuer’s reputation for avant-garde timepieces.

Above 6 o’clock, the flying tourbillon is revealed via a large, circular aperture. The absence of an upper bridge makes this a flying tourbillon and confers an unrestricted view of the whirlwind at play. The titanium and carbon flying tourbillon consists of three double-spoke arms which ooze modernity. While some haute horlogerie tourbillons are equipped with an upper mirror-polished tourbillon bridge, necessitating hours of hand polishing, this watch eschews such traditional finishing and, by default, the production costs this would inevitably incur. In this regard I do not feel shortchanged, the neoteric appearance of the watch suits the approach taken.

In the upper area of the dial, a single barrel can be seen. It repeatedly depicts the company’s shield logo on its form and is supported with an upper bridge bearing the brand’s nomenclature.
By effectively splitting the dial into four distinct areas, there is a pleasing symmetry and proportion to the layout.

The hour and minute hands are polished, satin-finished and lined with SuperLuminova. The applied indexes share similar properties to the hands and their faceted extremities wonderfully aid legibility.

A key aspect of the design language is the repeated use of skeletonised detail. The open-worked bridges bestow a very structural aesthetic, reminiscent of a race car chassis, reinforcing, once again, the contemporary character of the watch.