Despite being only eight years old at the time, I can still vividly recall many aspects of 1976. One of my overriding memories was sitting on the back seat of my father’s new lavender blue Chrysler Alpine, travelling with my parents to Cornwall for our annual summer holiday. I remember the atypical sunshine and the high temperatures of that year. I have never forgotten suffering a combination of sunburn and sunstroke, making me a tad averse to sunbathing even to this day. 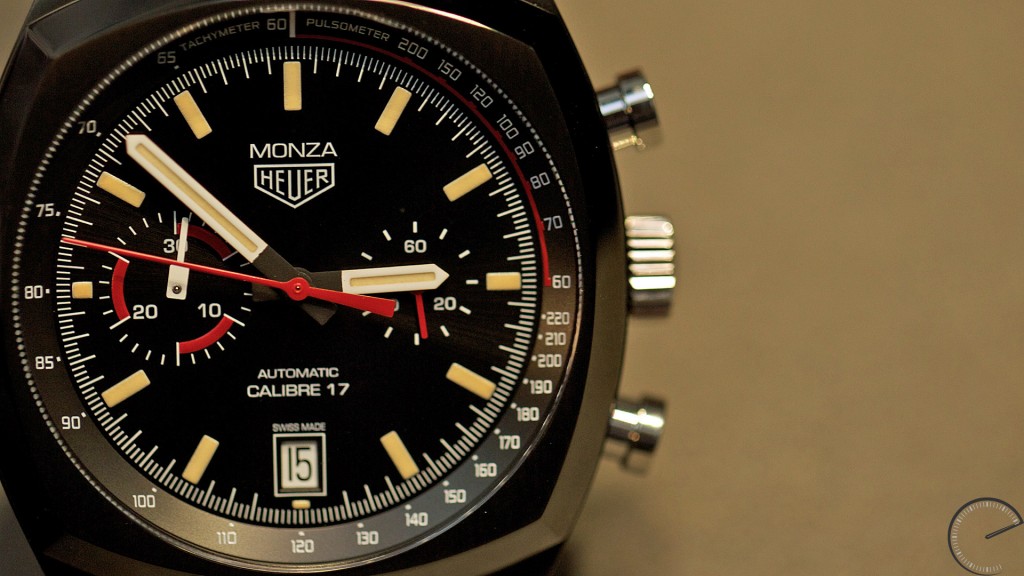 I confess that, despite now being an obsessive fan of horology, I knew nothing about this Heuer Monza   sport  watch at the time. Indeed, my overriding obsessions in 1976 were confectionery and Formula One, albeit I do recall the Heuer name gracing the nose of my favourite car, the Ferrari 312-T2.

During the Formula One season of 1976, I eagerly watched Lauda and James Hunt engage in wheel to wheel combat on television; I even acquired two Matchbox cars in order to re-enact all the overtaking sequences on my bedroom carpet.

Niki Lauda was leading the championship in 1976 when he infamously suffered injury whilst racing at the Nurburgring. Surprisingly, despite his near-fatal crash, he returned to competition only six weeks later at Monza. Ultimately, James Hunt narrowly beat Niki Lauda to the world championship that year at the final race of the season, at the infamous rain-soaked Japanese Grand Prix.

Niki Lauda is worthy of his iconic status, exhibiting huge bravery on several occasions. Moreover, his race-winning days continued after the set-backs of 1976 and he subsequently won the world championships in 1977 and 1984. Ironically, when Jack Heuer conceived the Monza timepiece, he could not have known that this watch would retain a timeless appeal and ultimately gain its iconic status within the annals of horology.

At Baselworld 2016, TAG Heuer luxury watch unveiled a reissue of the 1976 model, capturing the essence of the original but with a few subtle enhancements.

The black sunray dial beautifully shimmers in available light without inhibiting ease of read-off. The lacquered hour and minute hands are predominantly creamy-white, except near their fulcrum where they assume a discreet black tone. A touch of nostalgia is provided by the ‘vintage’ luminescent hour markers which evince an orange emission in restricted light.

Crisp white markings encircle the extremities of the dial. Located on the inner flange, between noon and 3 o’clock, a red pulsometer scale is presented. In order to establish a pulse rate, the wearer actuates the chronograph on the first beat of the heart and stops the chronograph after sensing the 15th beat, e.g. If the chronograph is stopped after 10 seconds has elapsed, the patient’s heart rate is 90 beats per minute (shown on the flange at 2 o’clock).

The highly textured calfskin ‘super racing’ strap is delivered in black and features a perforated motif, reminiscent of classic driving gloves of yesteryear. The traditional aesthetic of the strap is successfully paired with a contemporary black coated titanium clasp.

The self-winding TAG Heuer Calibre 17 will be familiar to followers of the brand, having already appeared in the Carrera Calibre 17 Chronograph. The frequency of the balance is 28,800 vph (4Hz), typical of a modern timepiece. This automatic movement contains 37 jewels and has a power reserve of 42 hours.

Owing to the solid caseback, I was unable to appraise the finish of the movement.

There is often something wonderful about remembering events from the past. I vividly remember Niki Lauda at the height of his motor-racing career and despite my tender years at the time, I can still recall his prominent teeth and red Ferrari race suit. His prowess at the wheel of a Formula One car has since become legendary and distinguishes him as an iconic figure.