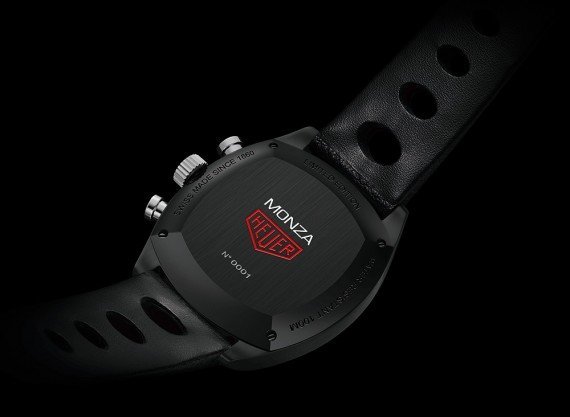 Forty years ago, in 1976, the watch company now known as TAG Heuer created a chronograph to celebrate F1 legend Niki Lauda’s first world championship title with Scuderia Ferrari, the racing team for which the Swiss watch brand was then Official Timekeeper (from 1971 to 1979). It was the first time that “Monza” had appeared on the dial of a watch.

At that time, the watch — designed by Jack Heuer, great grandson of the brand’s founder — was markedly different from its competitors on the market. Its cushion-shaped case was inspired by a 1925 model, and its chronograph function was enhanced not only by a tachymeter scale (used in auto racing to measure speeds) but also a pulsometer (which measures heart rates). Its then uncommon all-black color scheme was highlighted by racing-inspired red hands and counters. At Baselworld 2016 this week, TAG Heuer has returned to this model’s roots with a re-edition of the Monza that is the first in the modern era to include both the tachymeter and pulsometer scales as well as the original type font on the dial.

TAG Heuer’s Heuer Monza Chronograph (which, of course, proudly sports the vintage, pre-TAG, “Heuer” logo on its dial like other models in the brand’s historic collections) maintain’s the original’s cushion-shaped case as well as its all-black look and black and white lacquered hour and minute hands. The indices are coated with a “vintage” Super-Luminova that glows orange in the dark.

The case of the modern Monza measures 42 mm in diameter — up from the 39 mm of the 1976 original — and is made from grade 5 titanium, making it lighter and more shock-resistant than its historical predecessor, which was in steel. The case’s masculine, matte black appearance comes from its titanium carbide coating, which has brushed and polished finish.

The watch is equipped with TAG Heuer’s “super racing” strap in full-grain black calfskin with top-stitching, which evokes the design of the three-spoke steering wheel on racing cars of the era.Inside the watch is automatic Caliber 17, an integrated chronograph movement with two chronograph counters at 3 o’clock and 9 o’clock and a date indication in a window at 6 o’clock.

The solid, screw-down case back is numbered and features the engraved Monza logo in white and the engraved, historic Heuer logo with a red lacquer finish. The TAG Heuer Heuer Monza Chronograph, a tribute to the 40th anniversary of one of the most collectible vintage watches in the Heuer/TAG Heuer portfolio, will retail in the U.S. for approximately $5,200.